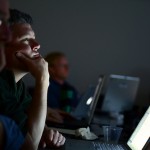 I got the opportunity to go to WordCampEd at George Mason this Saturday. Special thanks to Dave Lester- our host and the organizer of the conference (blog and twitter) It was pretty interesting to me in a couple different ways. One, I got to meet (in some cases just sit in the room with) a lot of interesting people and add their various feeds into my aggregator. There’s something interesting about these type of conferences. There really small and intimate. They are full of people who really want to be there, and that are passionate about the topic. Two, I’m really convinced that HCPS needs to go to the WPMU model. We’ve got all sorts of schools doing their own thing with tons (relatively) of individual blogs. This means individual updates, individual theme uploads, individual plugin uploads and most importantly no community outside the school and little interconnection within the schools between blogs. I think that’s what most people don’t get. In my opinion, Jim Groom has done such interesting things at UMW because he has worked hard at connecting the individual blogs, at creating community. He makes comments, he brings key posts to the forefront for attention. He’s made a unified whole. That’s where the power is and it’s interesting power because it’s exponential. We saw evidence of that […]

OK vs. okay – Grammarist “It might be OK for a beefy Wallaby to stare down a bunch of powerfully built Kiwis as they launch into a ferocious, blood-curdling haka. [Sydney Morning Herald] “ tags: words english ok weekly How ‘Deprogramming’ Kids From How to ‘Do School’ Could Improve Learning | MindShift | KQED News “Holman also asked students to read “Sermons For Grumpy Campers,” by Richard Felder, a graduate level professor who never lectured. In it, Felder describes his students grumbling that they hated group work and that it was his job to teach them, not the other way around. Holman’s students said the complaints sounded like they came from kindergarteners or themselves and were amazed to find out the complainers were graduate level engineering students. “ tags: sbg teaching education weekly 5 Instagram Tips for Science Artists – Symbiartic – Scientific American Blog Network “Here are my five tips for science artists on Instagram.” “Go hashtag crazy.” tags: science artists instagram tips weekly Disinformation Visualization: How to lie with datavis | Visualising Information for Advocacy “But all maps lie. In fact, maps have to lie, otherwise they wouldn’t be useful. Some are transparent and obvious lies, such as a tree icon on a map often represents more than one tree. Others are white lies – rounding numbers and […]