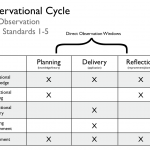 I know. I know. You’ve been eagerly awaiting more VA specific teacher evaluation posts. Because of that intense demand, I offer up this frame for the new VA DOE standards for teacher evaluation. Recall, if you will, what I’ve been told is an overly analytical, semi-obsessive breakdown of what the standards actually say. Based on that language, anyone want to take bets on what percent of the evaluation student learning progressions will be in 2015? I ignored the random assortment of items thrown under “Professionalism” and focused on the instructional items. The goal was to figure out when you’d really see these skills being practiced. I’m claiming three observational windows- planning, delivery, and reflection (and after your first lesson ever, reflection and planning ought to become conjoined twins)This may be me claiming loudly that water is wet.. I would argue that often we observe instruction and claim we can then figure out what happend in planning. I don’t think that’s the case. More energy and time needs to spent working with people when they are planning. Prior to putting these thoughts into action, we need to see what connections are being made, what information is being considered, etc. Looking at the end and trying to work backwards seems to encourage assumptions and mistakes on the part of the evaluator. People […]

When we say “lifetime” . . . “First off, it’s important to understand that when we offered ‘lifetime’ support for a product; this referred to the lifetime of the product. As you’ve seen previously, we’ve retired products. That’s because these products, at some stage, become no longer viable or sustainable, and we can’t justify spending time on improving that product.” tags: weekly promises words woo Determine your eligibility – What you need to visit Canada as a tourist “The following travel documents are not considered reliable. You cannot use them to enter Canada: passports supposedly issued by Somalia,” tags: weekly Why drivers in China intentionally kill the pedestrians they hit: China’s laws have encouraged the hit to kill phenomenon. “Most people agree that the hit-to-kill phenomenon stems at least in part from perverse laws on victim compensation. In China the compensation for killing a victim in a traffic accident is relatively small—amounts typically range from $30,000 to $50,000—and once payment is made, the matter is over. By contrast, paying for lifetime care for a disabled survivor can run into the millions. The Chinese press recently described how one disabled man received about $400,000 for the first 23 years of his care. Drivers who decide to hit-and-kill do so because killing is far more economical. Indeed, Zhao Xiao Cheng—the man caught on […]

Swiss cows and the environmental future – Veronique Greenwood – Aeon “The market supports to local agriculture would end, yes. But the farmers would be paid directly by the government for something else. They would be paid for, among other things, keeping the mountain pastures clear of trees, keeping the forests clear of the cows, and keeping the water clean. They would be paid for keeping land in agriculture, for treating their animals well, and for maintaining the social structure in rural areas. It is a way of thinking about the use of the land that environmental scholars and policymakers call ‘payments for ecosystem services’. In essence, the Swiss government rewards farmers for the maintenance of the landscape — both environmental and cultural. “ tags: Switzerland ecology economy cows weekly For Billions of People, “Wasting Time” Makes Little Sense – Facts So Romantic – Nautilus “The idea that “time is money” is taken for granted in many clock-time cultures, including North America. When we want to get something done we budget our time carefully. We read books and download apps to help with time management (which turns out to have similarities with financial management). And if we make an investment of time, we hope for good returns. (See the related Nautilus article by Greg Beato, about how wasting time can […]