As we prepare for the next theme in our MOO-ish thing, I figured I’d condense and summarize some of the products from this run. 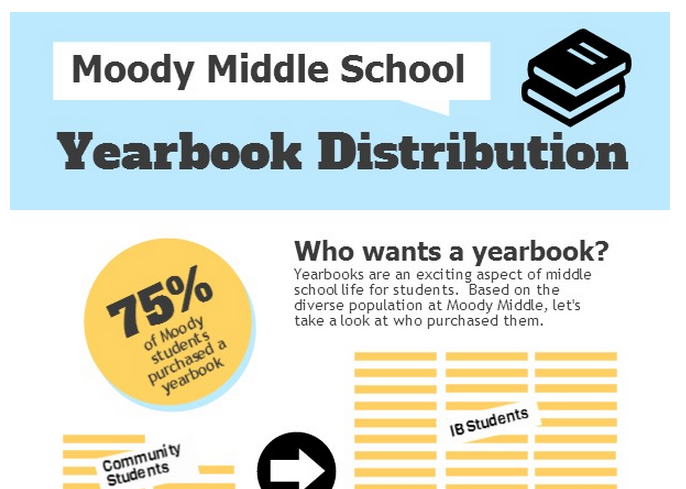 Gillian Lambert a wonderful English teacher from Moody MS opted to play along and visualized yearbook data for her school. Gillian documents the process and highlights how visualizing the information led her to new understandings. I think that’s one of the most neglected benefits of a process like this. Creating leads to additional understanding for both the audience and the author.

Debbie found that sometimes the web 2.0 tools aren’t up to par. Her critique of the infogr.am and piktochart services echoes some of the problems I’ve had with services like this over time. They are fast and relatively easy but you give up some key elements of control that some people won’t be happy about. I think they have their place but you have to go in knowing the limitations of the tool and the impact of those limitations on your ability to control the narrative.

Katie spent some time tracking happiness but with great common sense opted to move on to looking at Google Doc usage. She used mural.ly to layout the graphs from GAFE in a way that lets you see the big picture and drill down to the details. The infinite canvas concept that you have in mural.ly and prezi is something that has some fascinating possibilities.

Gaynell used her amazingly consistently entered Outlook calendar data to plot all of the yoga teaching she has done since the dawn of time. Her post does a great job breaking down how she got the data from Outlook, into Excel, and then parsed out in a way that allowed her to visualize. Her post has encouraged me to look at how I’m categorizing my calendar information so that I might actually use it. My current method is not a method. 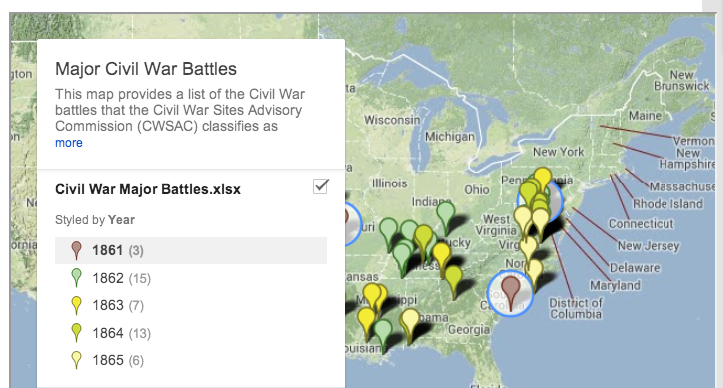 William Berry visualized data about the Civil War and used Google’s new mapping tool to do it. He got enough of my interest that I signed up for the same class he’s taking on how to build in the new Google Maps/Earth. I particularly like how he’s framing data analysis as a necessary student lens on the world. As a result of this conversation, we’re going to try playing with this same data in Exhibit.1

Karen Richardson started some work mapping where food comes from in Exhibit as well but hasn’t submitted anything officially. I’m linking her in anyway. I’ll also be working some in the near future to update my Exhibit tutorials. If you feel like time traveling the old tutorials from around 2007 are here. iWeb anyone?

None of this was massive but I’m really happy that people have participated and have enjoyed things. The next round will likely be focused on the idea of remix (defining post coming soon). It’s a big topic and the Internet is a big place. You’re more than welcome to come join us.

1 I may over advocate for this tool but it remains uniquely capable of visualizing information over time and space in a fluid faceted user friendly environment. 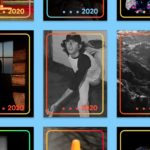 Origin Story The 2020 All Stars projectWarning. There is nudity. Art nudity. is tied to the FotoFika site supporting photography faculty teaching online due to COVID. One of the concerns that came up in discussions was that this year’s graduating class wouldn’t be getting the personal connections that normally happen during exhibitions. That led to a discussion around Mike Mandel’s baseball card series for photographers back in the 1970s. The idea here is that we’ll generate baseball card-style images for graduating students. We’ll have a second portion where curators will be invited to comment on specific artist cards and their comments will be integrated into the card. Some portion of the cards will eventually be printed.I’m hazier about this side of things but I’m likely to be messing around with some InDesign workflow based on the data we have. Technical Stuff of Interest The site ends up being interesting in a few ways. It’s running off a Google Form for image uploads etc. What you may or may not know already is that Google stopped letting you serve images from folders in any sort of decent way a while back.6 months? A year? What is time? Who cares? The past is the past. Sure you can do stuff like what the Awesome Table people suggest here but the image quality […]

I love the way in some videos you can click on images or text on the screen and they are interactive- taking you to URLs or different portions of the video. I really feel that in education, and elsewhere, this has amazing potential. Making text interactive through hyperlinks changed the world so doing the same thing with video is likely to have some real power as well. I’m not a big fan of Flash so I had explored a few of the Quicktime options (mainly Livestage Pro. The software creating these movies is fairly expensive and has a pretty steep learning curve. Not ideal for education or for encouraging student/teacher use (or me for that matter and I like this stuff). Enter Asterpix (I know, with a 12-3-07 launch I’m late to the ball). This online service (registration required) allows you to add clickable links to movies. It plays nicely with Youtube and gives you and embed code. See example above. While it’s not quite as slick as I’d like- it makes up for it in terms of ease of use and pure getting things done. I’m very happy. There’s something to be said for just increasing the amount, as well as adding different formats, of data in videos and then there are a lot of creative options you could […] 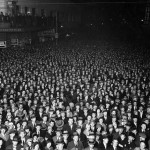 I often want to know just a bit more about numbers I see in tables. As I was looking at some thing today, I stumbled on the Wikipedia page for “List of Most Viewed YouTube Videos“. After being more than a bit amazed at the utterly staggering numbers. I wanted to know what they translated to in terms of years because the numbers were just too big. I remembered that Google Spreadsheets will let you pull in a table from a website with no fuss. All I needed to do was put =IMPORTHTML(“http://en.wikipedia.org/wiki/List_of_most_viewed_YouTube_videos”,”table”,1) in the first cell on the spreadsheet and viola the table is transcluded. I can now add a few more calculations to figure out the import stuff – like how many years worth of time have been spent watching Gangnam Style (16,274.24 years for the recordAssuming I didn’t screw something up.). You can go mess around with the data here.