So, it’s been a while since I felt like I just flat out sucked at a lesson. There’s a number of reasons for that. The main one is I don’t teach every day (or it’d happen a lot more often). Secondly, I’ve probably been doing too much in my comfort zone- a bad sign. And last of all, with this new position I’m doing lots of things but much of it within relative isolation or with people who are of like minds.

Cue opportunity for the exact opposite of that.

The math teachers had been rough before with the introductory 21st skill module. So I really wanted a shot at the math teachers. We’d been working frantically on creating all this content for about ten days. I’d felt pretty good about our take and how solid it was for most of the subjects but really didn’t like it for math.

The usage portion was aimed more at how to find and use real world data sources and why you might want to do so. I was using some of Dan Meyer’s lessons and a few other things like Google Trends and the US Census.

It seemed like advanced search and Delicious would still work on the teacher side even if they fell short on the student side with math teachers.

Initially, my intro went a little long. I ought to trim it down a good bit. I’m thinking without any interaction from the class I’d want it to be closer to 5 minutes. Here’s a quick and dirty early recording of it if you’re interested. Still, I got a few laughs but no real interaction. I could only get one person to hazard a guess on my Library of Congress question. Things were not looking too good- might be evidence of my naivety that I thought that was an interesting question.

The google search portion goes pretty well. I give a brief demo of some searches that have been valuable to me and let them run loose for a while to try things out. One negative here is that about 7 people out of 29 or so didn’t bring their laptops. This made hands on much more difficult (at least for those without vivid imaginations).

Things start to go south with evaluation. I start off by admitting that this might not align directly with their SOLs. Hind sight- bad idea. I think I score some points with the image from the NY Times below but can only get interaction from the one guy who gave me a guess before. 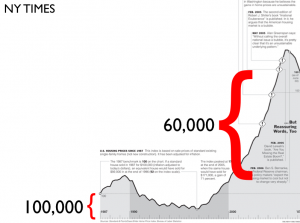 In the end, I get three people to speak. At least the silence is occasionally broken when I say things like “Stony silence equals consent.” It’s hard to argue with silence or really get where you’re failing to connect if no one says anything. I completely failed to get them engaged in any kind of conversation.

The one bit of conversation that did occur was essentially this “Well those are important things. I think we all agree they are important but if they aren’t given priority via the SOLs we won’t teach them.” I don’t fault the guy who said that. He was being open and honest. At least he was talking. My problem was I didn’t have the content knowledge to contradict this. I really feel it’s likely you can teach critical thinking and media literacy while covering some math content. I didn’t prepare well enough to have those examples on the tip of my tongue.

We moved on to Delicious and I awkwardly showed how it might work and a rationale for using it. The previous mess had left me out of sorts and what should have been easy felt really awkward. I also could not seem to find the document in Schoolspace where I’d fed in some Delicious links. I have no idea why. People did seem to be signing up and buying into the idea.

By this time, things just needed to be wrapped up. We only had a few minutes, so I ran through a few things and got a few people to speak on the CTE side of things.

So, I’ve made lots of excuses for why this sucked and there were many things that didn’t help but at the heart I feel I didn’t carry it off. The content didn’t match closely enough to the SOLs and I didn’t prepare well enough to have concrete examples of how to align it. I’m not sure there’s a way to deal with that kind of subject difference well but the way I tried certainly didn’t work. Seems like I need to rethink things and figure out how to structure this so that I don’t have to have the answers. I guess I need to work on my questioning and really think about how I’m structuring things.

Oddly, the reviews submitted by the teachers were positive.

“I wear a stethoscope so that in a medical emergency I can teach people a valuable lesson about assumptions.” tags: assumptions weekly Like This So I Know I’m Real | Hazlitt “For my own peace of mind, I recently did a massive Twitter purge. Usually, this undertaking is a pragmatic one: A prioritization of voices to quell the overall noise. In my case, though, it was a matter of neurotic self-preservation. I know that there are all sorts of complicated reasons why people get ignored on Twitter, ranging from safety concerns to finer points of identity. I know the difference between exclusion and rejection. I also fully get that some people are so inundated that they can’t possibly respond to each and every query; this is the readily apparent nature of Twitter hierarchy. And there’s a vast sense of entitlement in thinking that anyone should engage with you. But we’ve all had the experience of finding out that a peer has unfollowed us, or felt rebuffed after trying to strike up a conversation and failing. It’s not a good feeling. And it’s in the very DNA of social media.” tags: socialmedia social twitter weekly purge Searching for examples — Medium An interesting pattern to think about as we try to capture examples at larger and larger scales tags: github scale blocks data […]

How did they make that? | Miriam Posner’s Blog Maybe this is a framework/concept for doing some of the ALT Lab documentation. It mixes tutorial/tool guide/example in a way that works pretty well. tags: digitalhumanities examples tutorials tools weekly After Twitter bot makes death threat, its owner gets questioned by police — Fusion “Robots are starting to break the law, the law is trying to figure out what to do about it, and it all seems to be happening in Europe. Last month, Swiss authorities seized the Random Darknet Shopper art exhibit which included weekly purchases made by an automated bot given Bitcoin to surf a Dark Web marketplace. (It mainly bought drugs.) This week, police in the Netherlands are dealing with a robot miscreant. Amsterdam-based developer Jeffry van der Goot reports on Twitter that he was questioned by police because a Twitter bot he owned made a death threat. “ tags: robots twitter twitterbot future laws weekly How I Taught My Computer to Write Its Own Music – Issue 21: Information – Nautilus “On a warm day in April 2013, I was sitting in a friend’s kitchen in Paris, trying to engineer serendipity. “ tags: computer music serendipity weekly Big Bird on Twitter: “Tweet?” “@BigBird I’m too tall to be short!” tags: weekly twitter bigbird Casey Reas – Artist […]