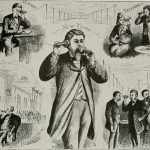 flickr photo shared by Internet Archive Book Images with no copyright restriction (Flickr Commons) Sometimes you want a Google Sidebar element to be able to pull variables from a Google Script. The key element is google.script.run.withSuccessHandler. I’m still not entirely sure I have this in my head deeply/correctly but this is functional and might help someone else (even if that someone is just me at a later point in time when I’ve forgotten this). This one sets some default times based on spreadsheet variables stashed elsewhere and then automates some date/time entries using the form sidebar. Sidebar Code Google Script Code The entire sidebar/script setup is below in case anyone cares for some reason. Pick Your Date Start/End Times Start: End: Hide Previous Dates Submit