After reading Martha’s awesome post, I was not happy. Against my better judgement, I went to watch the BlackBoard “Mashup” tool tutorial1. There was something about the voice and the strangely stilted cadence that forced me to do this.

Actually, this would be a pretty interesting assignment. Take the media of two opposing viewpoints, mash them up so that they appear to express one harmonious view.

1 Hilarious by the way

Forrest Gump Not my favorite movie but I’m now randomly thinking of movie shots that would make good animated GIFs in my head during spare moments. Wolverines! Red Dawn was one of my favorite movies growing up. I lived in South Korea on an army base when this came out. I was totally prepared to live out this movie- full camouflage and survival gear every day, fully trained and prepared. I then go to Youtube and see if my memory has any fidelity. You see the results below. Messed up the speed on this one but I leave it here as a momento of a lesson learned. Even if it looks right in PS, don’t trash the capture file- EVEN if it keeps your desktop cleaner. Blues Brothers Another actual favorite. 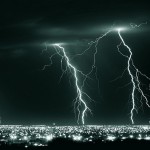 ¡Rayos! by Brujo+, on Flickr I’ve been brainstorming some broad categories of things that might be worth discussing as part of ds106. This is mainly a re-categorization of stuff I’ve written about before but I wanted to try to think about how some of this might fit together down the road and make sure I had examples in a one spotClearly, things got out of hand. Now that I look at it, I should have put this in a spreadsheet and run it into exhibit. I didn’t think there’d be quite this much for only one category. I’m also seeing how examples will often fit into multiple categories. I should know better than to make lists in blog posts. It never does the data justice. Anyway, here’s draft #1 dealing with examples of restrictors. Restrictors These are stories/projects that become more interesting because of the restrictions involved in creating them. Text 25 word stories 6 word stories 6 word bios 6 word teen memoirs 6 frame comic summary Images/Presentations 4 slide sales pitch Pecha Kucha Restrict your images to any odd category. I used 98% medieval bestiary images once to talk about blogs. I plan to do an upcoming presentation using nothing but tattoo photos. Battledecks Battledecks – alternate rules Genre/Form Restrictions Survival Manual Wolverine Poetry Zombie vocabulary Passive Aggressive […]