I was asked to speak about OER in K12 at the VMI STEM conference a few days ago. The speaker before me gave an accurate definition of OER and listed the normal places you’d expect – OpenCourseWare, MERLOT, Curriki etc. For what it’s worth, I listed those sites as well but when the places where I found digital content to be more interesting tended to be other places.

It seems like the bridge that is far enough (but not too far) in K12 may be something that provides a central pillar of approved, vetted, standardized and permanent1 but that provides a access to fairly ephemeral, topical media elements. The image in my mind is something like the vine image below. What becomes interesting is how you might do that. You could create a platform that allows those people with the time/interest in finding and sifting through things to populate content for those that don’t. It wouldn’t be hard using RSS. It seems like it’d be something like SuperPunch where someone who is passionate about a particular topic combs through different sites for things that are interesting. You could do state standard based aggregation but that’s likely to get messy and require an organization that will be onerous if you want stuff to “stick” near the concept long term. If you’re willing to accept that the ephemeral content will “drift away” over time things become much easier. If you’re ok with simple subject tagging things also become much more pleasant (for the tagger anyway). If the learning registry takes off you’ll have a good repository of interesting metadata attached to traditional learning objects. I’d be really interested in associating data like that to media that people would use when not coerced.

In many ways, I think that a decent amount of content that is meant to bleed away is good. It would be interesting to see what became part of the core and what was let go over time. That would cause some problems depending on the source of the content. I made some argument that for all intents and purposes OER was pretty much equivalent to free media that you could link all your students to or have them download (as intended). You would wander into licensing issues if you wanted to add that PAR

It does seem important to me to expand the concept of educational materials far beyond how we typically define them. MOOCs, OpenCourseWare, Khan Academy, for the most part, all seem to be reinforcing the idea that this material ought to be modeled after direct teaching and often is simply video lectures. That should exist sure but I don’t find it particularly interesting or new. I do think our access to raw data, live commentary from participants/experts, interactive data visualization tools etc. are both unique and important when we think about what educational resources are. I also tried to push the idea that open source tools and platforms are a vital part of the OER concept.

I also feel pretty strongly that the focus on super vetted content that parallels textbooks in terms of being of reading level X and approved by committee Y will lead us to the kind of homogenized pap that fills textbooks today. I know of few people who have ever enjoyed reading a textbook. If the teacher can’t help students work through information then you’re likely dealing with someone who isn’t going to be able to teach them either. You’d be better off firing the teacher and buying the textbook. The rise in concern over the validity of textbooks is probably tightly tied to the declining faith in teachers.

In case you wonder what random things I threw out there to the audience as potential fodder for instruction, here is the delicious list with a few random conference related items thrown in as well. 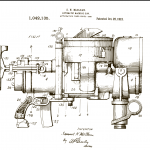 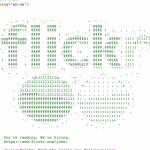 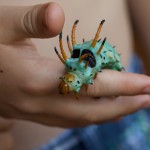 We found this monster today. He’s a Hickory Horned DevilWhat an awesome name.. We researched him- learned about his habitat, that he’ll eventually become the regal moth, and the fact that he’s just about ready to burrow into the soil for pupation. We’ve found a lot of animals and insects this summer. Everything from tortoises to caterpillars- all by chance. They each led to more knowledge for my sons but more importantly they’ve increased their interest and curiosity about nature and science. That’s what I want out of schools. I want them to create more opportunities for teachable moments, more chances for kids to follow their passions and interests, more pathways and more flexibility. I want schools orchestrating chances for serendipity. What I see instead are multiple choice tests and many, many more multiple choice tests to prepare you for the final big multiple choice test. What little chance, individuality and spontaneity left is getting stripped out and we pretend to wonder why teachers quit and students are bored. Serendipity is the enemy of standardization. Serendipity happens when your class is out in the woods and finds a giant, terrifying caterpillar even though you’re supposed to be looking for leavesand in today’s climate you’re lucky if you even get to go in the woods because of liability concerns and a […]