Reality is Broken (is broken)

I’m reading Reality is Broken by Jane McGonigal as part of a VSTE book study.

I do not like it. I find myself vacillating between anger and nausea (despite liking isolated elements). I started to break down this book point by point but found it tedious and repetitive to do so.

Essentially, the author’s point is that reality is broken because it isn’t like games- which by the way are super awesome (always). There are huge, vast, amazingly arrogant assumptions made about games and their applicability to all people in all contexts but that’s par for the course for this type of book. The statement that I couldn’t pass on was –

reality is too easy – location 400

Really? Maybe McGonigal is observing other people. Most people I know seem to have their hands full with reality. There’s an entire blog dedicated to people who publicly document that they can’t tell the difference between an Onion satire and reality.1

Even if we assume that reality is too easy for our populace2, the author spends most of the book arguing against the very things that make reality hard.

The exact nature of this “satisfying work” is different from person to person, but for everyone it means being immersed in clearly defined, demanding activities that allow us to see the direct impact of our efforts.

Life is often difficult because real activities are ill defined and it may take years to see the impact of your actions.

Blissful productivity is the sense of being deeply immersed in work that produces immediate and obvious results. The clearer the results, and the faster we achieve them, the more blissfully productive we feel.

I’m not sure this is true but it sounds like it’s making life a lot easier to me. Most of the pieces from staying at the edge of your ability level, to choosing what work you do, are all about making life easier.

It doesn’t really matter. I agree with the concept this book should have stressed- that we can apply many of the principles of game design in a variety of ways to make other things better and more pleasant. Like most edtech presenters, it seems that the author’s goal was to create statements that people would tweet rather than aiming for rationale, accurate things to say. The extended soundbite as novel is an unfortunate byproduct of our times. This could have been an interesting book.

The book starts with a quote from Edward Castronova.

“If it3 happens in a generation, I think the twenty-first century will see a social cataclysm larger than that caused by cars, radios, and TV, combined…. The exodus of these people from the real world, from our normal daily life, will create a change in social climate that makes global warming look like a tempest in a teacup.”

First, I’d argue that cars, radios, and TVs did not cause a “social cataclysm.”

If we ignore that, maybe we could see this as a fresh cataclysm if it was a movement from work hours to games/virtual worlds but it isn’t. It isn’t an exodus from “normal daily life” but rather a possible change in diversions. McGonigal later references that gamers watch less hours of TV- seeming to back up the concept that this is a shift of leisure time rather than a radical reordering of work/gaming balance.

This is one of those things that’s fun to say but doesn’t hold water. It wouldn’t make me as angry if it weren’t so prevalent in popular “research” books right now and horrifically evident in most anything to do with educational technology. It makes for a pithy twitter-able quote but that’s about it.

It’s a bit counterintuitive to think about the future in terms of the past. But as research director at the Institute for the Future … I’ve learned an important trick:to develop foresight, you need to practice hindsight.

Yep. Never heard of anyone who studies the past in an attempt to figure out what’ll go on in the future. GENIUS!!! Make that person research director for the Institute for the Future. Also, you should make some sort of saying about an original thought like that so people can quote you. Something like . . .

Study the past, if you would divine the future. – Confucious

Look back over the past, with its changing empires that rose and fell, and you can foresee the future, too. – Marcus Aurelius

The best prophet of the future is the past. – George Byron

Those who do not learn from the past are doomed to repeat it. – Everyone

“There is zero unemployment in World of Warcraft.”

There is also zero unemployment in Disney Land. What a stupid, stupid thing to bother writing.

Oh and the one footnote I looked at gives no support to the statement it references.

Even professional drummers have remarked that it serves as a reasonable approximation of real rock drumming.

Links footnote 14 to this article about a guy who made his real drum kit into a controller for Rock Band. Nothing in there about approximating “real rock drumming”. Nothing even close to that statement.

1 Then when told it’s satire, either don’t know what that means (and make no effort to find out) or worse simply think “well, it should be true” and add it to the mental armor against reality.

2 We have, after all, already solved all those problems around pollution, energy, famine, war, suicide, addiction, cancer, obesity, homelessness, space travel etc.

3 Lots of people playing online games and getting involved in virtual worlds.

Bronze Age Orientation The “lessons” in the video are funny because they’re true (I think I’m quoting Homer Simpson)- don’t be a pompous ass (period, but especially not when advocating for a major change) positive version – Be humble. You don’t know everything and your way is not the only way. don’t make change a threat or tie it to a threat (the tribes with the bronze axes will kill you, the kids won’t learn etc.) positive version – Tie the change to positive outcomes for those involved. Focus on how it will improve their life. Why is it worthwhile for them? don’t put down the old ways (and then they’ll throw away your stone axes because they’re rubbish) positive version – Honor the past*. Even if you hate the old way, insulting it will tend to increase resistance to change. In education, the focus should be on adding tools and exploring options rather than in taking them away. The bronze shoes and window are also pretty similar to the “must use twitter based podcasts wikis” in class mentality too often seen in EduBlogosphere Land. Tools are tools and each has its place. This video shows the hypothetical meeting held to discuss changing from stone age technology to bronze age technology. You’ve got the reluctance you normally see (funny but […]

Here’s a cool mash-up of Tetris and U.S. Geography. You can choose from three levels of play (the most difficult drops the state names). Could be a great review game. Via Neatorama UPDATE: They’ve added Europe. 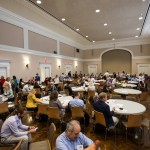 I had an interesting day at UVA a few days ago as part of their Innovation in Pedagogy Summit. I got the chance to talk to UVA’s Teaching Resource Center group and listen to some interesting educators talk about their practice. I was the closing keynote and I talked, as I have before, about what educational technology might be versus what it is. Essentially this was an extension and deepening of the It Could be Beautiful concept I did at VSTE a few years ago. It helps to see the depth of the perversion and misuse of educational technology before looking at ways it is working. Otherwise people tend to pretend it all sucks or it’s all going great (depending on their own stance). We seem to have created a populace, in the USA at least, that has a great deal of difficulty with things that are not stark examples of black and white. I don’t know if I should blame the media, capitalism, or standardized testing.It may be that these are all the same things. What made this particular iteration a bit stronger was starting off by asking the audience to do something right away that set the scale of what we’re endeavoring to do in education. I asked them to go and read their college/university/departmental mission and vision […]