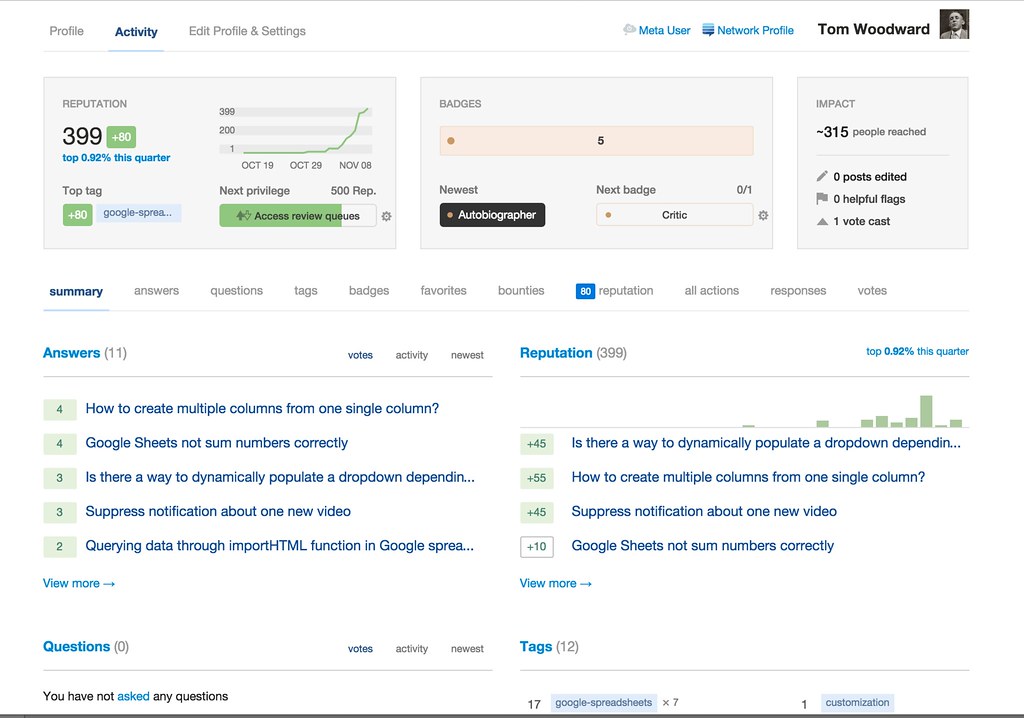 We have two faculty learning communities exploring how technology and the Internet might change how community engaged learning can work. I’ve attended a few meetings and one of the key things I take away from the conversations is that I have a slightly different view of community. It did get me thinking about giving back to the community that’s been helping out so much as I’ve tried to tackle more technical challenges.

I’ve learned many things from Stackoverflow so I thought I’d make some effort to contribute some answers. I’ve attempted to comment on things there before but you need 100 reputation points before you can do that. So I needed to actually answer things. Given I’ve been writing on the Internet for a large number of years you’d think I’d have more confidence but the structure of Stackoverflow (and the whole Stack Exchange community) is a bit different. I’m used to just posting what I think or what I managed to get to work. It doesn’t feel quite the same as “this is the answer.” There’s also some angry nerd stuff that goes on at times that I’m not a big fan of.

As I’ve gone a little deeper the experience has been pretty positive. While I’ve answered some questions in Stackoverflow, I’ve ended up participating more in a group focused on Web Applications. In both groups I’ve answered a number of questions around Google Sheets. That’s not terribly surprising given I’ve used it quite a bit in the past in ways that helped me avoid programming. One thing I’m pushing myself on is answering questions where I don’t quite know the answer or taking the answer a step farther than what I’ve been able to do. I don’t want this to be a way to congratulate myself for what I already know but a way for me to gain knowledge while helping people. Walking that edge is interesting. I’ve learned a good bit more about scripting Google Sheets as a result of helping people for the last two weeks.

I’ve also been learning things simply from reading through the comments. People have questions about things I haven’t even thought to do or ask questions with words I’ve never heard. It leads me to interesting things. I love things like this.

I’ve done a few things to make it easier for me. I tend to make examples, especially for Google Sheets stuff. It helps explain things to the requester and it provides something for me to go back to as a reference later. I put all these in a Stackoverflow Examples folder in Google Drive that I’ve already set to share to the world. This keeps me from forgetting to share the document properly.

I did get a down vote on one of my responses which made me disproportionally unhappy. It’s part of the culture of the site but I’m not a huge fan. I did learn from my one submission to Hard Core Street Photography that my personality doesn’t respond well to excessively negative feedback from strangers.

On the bigger picture side of things, there seems to be so many places like this that we could use in/as education. When I had no right to be doing technical support, I used to get and eventually give help on the now defunct MacTalk. Technical stuff is certainly easy and site/tools like Codepen make it easier and easier to show working examples that people can then modify. But there’s plenty of places for lots of other opportunities that aren’t tied to code. Stack Exchange has a ton of interesting communities from Astronomy to Sustainable Living. Reddit has options as heavy as suicide prevention or places that might be heavy or light like picrequests. I even see historical research going on in the comments of Flickr photos. This is just the tiniest tip of the ice burg. So many options to do real work to help people while proving you have certain skills.

Clearly, I’m not suggesting people don’t work with the people in their community. Those face-to-face opportunities are unique and priceless but they’re rare and they tend to be for a very particular classes/subjects. Technology opens up a number of doors to other subject areas, to other groups, and to some fairly different kinds of interactions. We ought to take advantage.

Working with a faculty member we had a rather long page that was originally written in Google Docs. It had many sections that were (mostly) designated by H tags of various denominations. The goal was to and put it on a website quickly build an index of anchor links. I did not wish to do the index portion by hand. With javascript things like this are relatively pleasant. You can see the whole thing in this codepen but I’ll break it down a bit below. First we can get all the H tags with querySelectorAll. I can console.log(headers) and I’ll see a NodeList of all the headers it found. I tend to work console.log all my variables as I go just to make sure it’s really happening the way I think it is. My next move is to add an id to each of these headers so that we can navigate to them via anchor links. with this forEach loop each header will get an id of header-whatever number we’re on in the loop. Now that I have headers that I can link to as anchor links, I need to build the index and put it somewhere. In this case it was easy for me to add a div to the source manually so I did. That will be where […]

In trying to get a better handle on how we’re going to manage our plugins in the future, I found the API for the WordPress.org plugins data. Not like they were hiding it but I’d not seen it before.Consider me Columbus– absent the genocide, slavery, and other terrible things. Replacing *slug* in the following URL gives you a pretty robust javascript With that option, I could build a little Google Sheet/Scripts viewer that would look up information based on a list of plugin slugs. I could set conditional formatting to do various things for visual cues . . . I could even build a little mini-algorithm to evaluate different aspects and weight them towards a total plugin score. I’m debating whether it’s worth working into a more sophisticated plugin that will tell me how many sites the plugin is installed on, display that data etc. There are plugins like that out there but they die on large multisite installations.I have a functional, if crude, option that paginates through them in a way that doesn’t crash/die. I’d also like some way to tie into the vulnerable plugin announcements. Here are the two little functions that look up and write the plugin’s health based on the slugs being written in column A and a header in row 1. 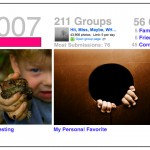