You know I’m focused on those high-traffic titles.

I’m doing a site for the esteemed Jon Becker’s school law class. The goal is to take tweets that exemplify really bad legal choices by public school administrators. They even have a hashtag – #schoollawwtf.

Since we’re taking tweets into WordPress for further analysis we end up with some weird constraints. I can’t rely on useful titles if we want to automate this as the tweet content might contain any number of things and the regex to try to purify it wouldn’t be worth the hassle.

New content wouldn’t have any body text either because it’s just a tweet. Granted, I could duplicate that text in the body but I didn’t really see much point in that.

I opted to stick the tweet URL in a custom field. That soon led me to the handy wp_oembed_get function which was new to me.2 That worked very nicely for display on single posts (screenshot and code snippet below). 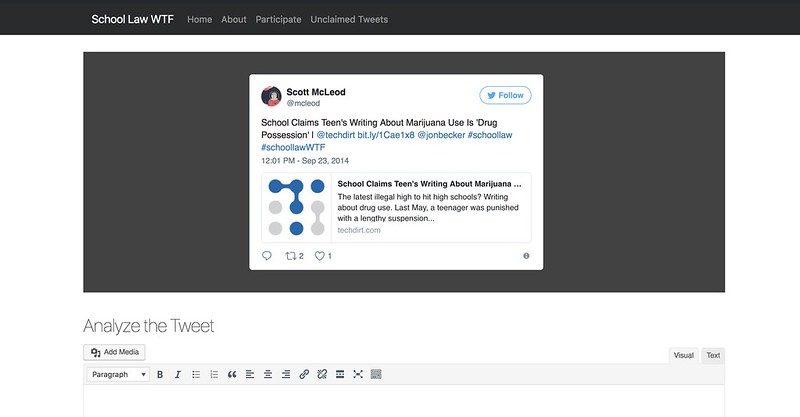 Where it ended up failing me was when we needed to display a bunch of tweets in need of analysis. All I had were the Twitter oEmbed element to show and clicking on them would take you to Twitter-land rather than to thee blog post like I needed. No big deal, I figured I’d throw a div over the top of the tweet, put my a link around that3 and be good to go. That’s not quite what ended up happening.

It’s a bit hard to explain but no matter how many different paths I tried the a link would close with nothing in it. You can see in the screenshot below. I end up with two empty a links with nothing to click on. Strange and really frustrating. I tried many, many other combinations . . . pulled things into functions, tried printf, wrote all the HTML together first, etc. etc. Nothing worked. 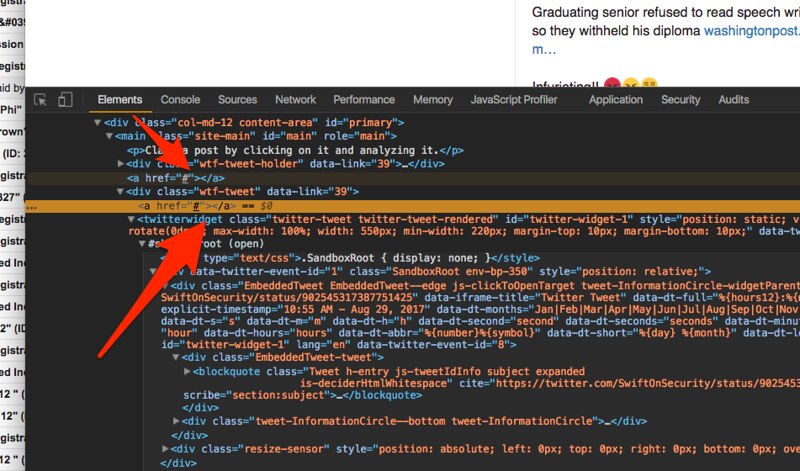 I finally decided to give up on the php route and do it in javascript. This ended up being almost painfully easy.

The div was already over the top so I just needed to turn it into a link that went where I desired. For me, that usually means going the data attribute route.4 Easiest thing I had handy was the post ID.

Now to for the javascript to make them clickable.

One of the other useful things I found out in this process was that Twitter treats retweets and quote tweets very differently than replies.

This is a quote tweet. On the embed, you essentially lose the quoted tweet entirely which sucks. It’s there on Twitter’s timeline but not on the embed.

While a conversation (replying to a Tweet and using our hashtag) gets a conversation you can embed like so (but which looks much odder on Twitter’s timeline).

1 My wife insisted I add the comma. She claimed it wasn’t possible I really meant a solid gold click-bait baby despite my insistence that I meant exactly that.

2 I really need to sit down and just read the whole codex.

3 Valid in HTML5 and all 50 states and Puerto Rico.

In WordPress multisite there is a set of allowed file extensions that can be found at Settings>Network Settings in the “Upload File Types” field. You can add to this list but what isn’t necessarily apparent is that if the extension isn’t already part of the list hereIt is a generous list. then you can add extensions all day and you’ll still get the security warning. To make a weird extension work . . . like .studio3 for instance you have to add the extension there and do a bit more. I tossed the following code in our network activated custom Rampages plugin. It’s just a hodgepodge of bits of code like this that I want applied across the site but that doesn’t seem like it deserves a plugin of its own. Take note that if you try to guess at the mime type and get it wrong, things won’t work. You’ll be able to select the file in the media uploader but it’ll still give you the security warning. I found this site for determining mime types. There may be other ways but it worked.

500 Error on wp-admin after upgrade

This happened with one of our individual installs and it’s happened before (but I forgot the solution) so I’m writing it down. After the upgrade to 4.7.1, the front of the sight still worked but attempts to get to wp-admin failed with a 500 error and the URL was redirecting to something with upgrade.php? in the URL. Solution Change the name of the plugin folder (I just prepend an underscore). Revisit your login URL. Run the database upgrade as prompted. You should now be in the admin zone. Fix your plugin folder name. Easy but also easy to forget.

I’m sticking this js/css combo in a number of the WordPress themes we’re building. It’s two pieces, a javascript piece that finds the YouTube videos and wraps them in a div and a CSS Piece that makes the videos full size for the enclosing div. It stops overflows from getting ugly and expands small embeds (via oembed or embed code). I think it’s handy and I keep having to go to codepen to find it. So now it’s here. See the Pen full size youtube/vimeo by Tom (@twwoodward) on CodePen.