Home > Reflections > In spite of

Audrey’s post explaining why she’s stepping away from ed-tech for good was something that resonated with me in a few different ways. I’ve also been a fan of Desmos (the tool) and Dan Meyer (the person) for a long time. That’s going back many years (2009 easily). But I separate the tool and the person from the business.1 Audrey’s post led to a conversation with Jim and his post has inspired this post.

I imagine being Ed Tech’s Cassandra as a depressing path. Looking at previous edtech travesties to contextualize the mess currently being pursued at massive profit is not going to make anyone who cares about humans happy. There’s some joy in being right. There’s the hope that maybe you prevent some bad choices but being a bad-news-Nostradamus2 is not a fun long-term occupation. Audrey provided research, history, and a compelling narrative but I’m confident she could accurately predict these futures without bothering with any of that. I’ve always suffered when I look at scale, when I focus on how little we’ve taken advantage of the potential, when I look at the timeline required for institutional change, when I see what failed to catch on in the 1960s.3

The basic problem is that edtech is a bag of gold. It’s just not the same bag of gold for lots people that I/we want it to be.

Can I expect the same basic drivers things that create Martin Shkreli to lead to better behavior because it’s education? Can I expect different behavior in the organizations operating in a world shaped by KPIs that opt for profit over everything else?4

When I was fairly young, I read a book about animals that eat people. I don’t know how real it is and I’m sure it has many problems but there was one scene that stuck in my head about the man-eating lions of Tsavo.6 The important part was that there were a bunch of railroad workers in tents at night. The lions are dragging people out to eat them and one guy was described as punching the lion in the face as he’s dragged into the darkness. He had to know that punching a lion isn’t going to work out but what else could you do? I’d like to think I would offer what resistance I could- futile or not. Might as well keep punching the lion in the face, maybe bite its ear or something, as I am dragged to my inevitable doom. Where I more literary, maybe I’d say I don’t want to go gently into that good night but I think of punching lions in the face. It’s not an exact analogy but it is what I have in my head when I think about doing edtech7 work in the world we’ve created.

And that’s what I look for. People doing things they think are right, or good, or fun in spite of all the structure that says they shouldn’t. It’s where I find hope. They do this in spite of the organization, the culture, the KPI.

Mainly, I find this hope in individuals or individual acts. It can happen with groups (be they businesses/colleges/learning groups) but it’s harder and often transient.

The thing is that there are so many people out there. Just as I’ll always be surprised by the depths of human awfulness, I also can’t know just how much good exists in ways that don’t end up visible.

I saw Fluid Math being demonstrated at some mega-edtech conference8 back when I worked in Henrico County Public Schools. This guy was going around doing his demonstrations on the giant vendor floor on other people’s smartboards. Maybe they couldn’t afford a booth. Luckily for him, there were 700 different smartboard vendors eager to have something useful happen on their hardware.9 Fluid Math came out of research at Brown. It mixed handwriting and gestural interactions with on-the-fly data visualizations that were manipulatable. You could write two acceleration equations and apply them to cartoon cars which would then animated according to those equations.10 Equation variables became manipulatable via sliders which changed the graph displays. Really just amazing stuff. Especially at that time. Crowds of math teachers gathered and were amazed. I believe I got it in as pilot for a number of classroom in HCPS.

Fast forward to now. You probably never heard of them. You can see from the their videos that they are terrible at marketing. They now have venture funding and are on Crunchbase. Their websites suck.11 They have tried to do some shifting to focus on automatically grading math problems.

I still love that software. Even if they eventually use it to kill puppies for profit, the roots still inspire me. I still see amazing potential in the concepts it crystalized. It did (maybe still does) the kind of interaction that enables people to build their own explorable explanations in dynamicland.12

I can’t rely on a company to anything other than generate profit and, in this case, I’m not sure I can even rely on it for that.

I can look for little glimmers of beauty in the vast sea of feces.

I wired the brick up as a very small external monitor, so you can, for instance, play Doom on it. pic.twitter.com/uWK2Uw7Egr

Take something like the Lego monitor in this tweet. I don’t know anything about ancient_james but I love that he did this. I can’t see any reason to do it other than “because I can.” It changed my conception of what was possible.

I look for things that change my mind about what can be done. Those things, regardless of the source, keep aggregating to change how I think and what I try to do. The source (person, company, college) isn’t all that relevant to me. I don’t even care (much) any more if I’m creating any degree of change beyond the limited sphere of people I interact with directly. I’ll take what I can get. I’ll help people who like hot dogs while looking for people who want something more. I’ll keep evolving my vision for what “more” is.

1 It’s really separate when I move from footnotes to parenthesis.

2 This was my self-appointed nickname. Predicting the failure of the pay-for-performance grant in HCPS, VCU’s failure to turn online ed into a goldmine, etc. etc. Easy to predict these futures.

3 I capped this list before I got too sad. I treat these kind of thoughts like sad movies. I avoid them whenever possible. I resist importing depression.

4 Could I have linked each letter in this paragraph to an individual article I found depressing? Yes. Could I ask more questions I answer? Yes.

5 Maybe you can. No problem. I’m not trying to convince you of anything. This is just how I deal with things. I don’t even recommend it.

12 Bret Victor being another person who keeps churning out things that inspire me and another individual, Gardner Campbell, mentioned him to me or I’d probably never have found him. 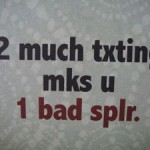 I Profe{|s|s}e to teach thee, that art vtterly ignorant, to reade perfe{ct}ly, to write truly, and with iudgement to vnder­ {|st}and the rea|son of our Engli{|sh} tongue with great expedition, ea|se , and plea­|sure. from the English School Maister Clearly Langvich, like Arithmeticke, doth naught chan-geth. Language is your servant. Language is not your master. Too many people seem to think language is in charge. English is the bastard child of any number of languages and times. What we have now is a confusing, ever shifting and evolving, mess. One squiggly line means the number two and three other line arrangements represents the word for the number 2. We have three words pronounced too but meaning three different things. On the other hand, we have the word lead which is spelled the same but pronounced differently and with an entirely different meaning determined only by context. We just accept that. Words also change in meaning and spelling over time, right? If enough people say a word means something for long enough, no matter the word’s original meaning, that becomes what the word means. It’s kind of like evolution mixed with democracy. I’ve actually listened to teachers brag that they never abbreviate when texting and that they used full and complete punctuation. That pretty much says to me, “The arbitrary ‘rules’ […]

For today’s installment, I will be mocking this article summarizing the ISTE keynote speech I could not stomach attending. Think of it as meta-mockery of a summarization. This kind of thing irritates me more and more because it wastes time and energy. People wander off chasing garbage statements (with good intentions) but the keynoters spouting this nonsense make no attempt to connect the dots. It’s all frosting, and a thin layer of sickly sweet frosting at that. I also hold ISTE to blame for furthering nonsense. They ought to know better. 1. There Are Now 1 Billion Gamers Worldwide According to McGonigal, this “critical milestone,” recently reached, encompasses everyone who spends at least one hour a day playing a game on a connected device — be it a gaming console, a smartphone, a tablet or a computer. “When you add it all up,” she said, “that’s seven billion-plus hours a week spent in maximum engagement through games.” 1. There are over 2 million people imprisoned in the United States alone.BBC- Yep, worse than Mother Russia. That’s over 7 people in prison out of every 1,000. “When I add it all up,” I said, “that’s 19 billion-plus hours a year spent in maximum incarceration thanks to prisons. That’s got to be a critical milestone or at least a large number which […]

I think about where we spend our money. We’re constantly trying to find easy ways out of holes, easy ways to scale metaphorical mountains. We look for processes to remove the chores of thought and decision. Education is floundering. We lost our faith in teachers. It is every politician’s easy drum to beat- after all. “Our schools are failing! The enemies are at the gate!”Don’t actually go to this site. I just liked that it was a warning site given the url. Who would argue that our kids don’t deserve better? Both parties agree. Education is failing. Our solution is not to work, to spend money and time on our teachers, to help them become better, instead we send our money away, spending precious time testing products of a system we insist is broken. We buy software. We buy content. We buy external experts.Guilty of being bought and sold. We buy reputation. We buy “trust” and “quality” because we don’t believe either really exists in our schools. Invest that money in our teachers, on smaller classes, on things that have been proven to matter. Make teaching a career that isn’t based on martyrdom. Martyrs die flaming deaths. Systems based on them don’t last. There are no easy answers. You can’t buy, process, software, magic your way out of this. There […]