. . . but I couldn’t resist. Not timeless certainly, nor broadly applicable but I’d have some fun with this in an English classroom. It’s along the same lines as the remixed “Read” posters Dan started and I did a few of a while back.

Lil Wayne and one of his lines from A Milli1.

Not sure if I need to be this obvious but it’d depend on the class.

If, for some reason, you want the big version of either just click on the image.

1 A good song but probably not playable in most classrooms and if you can get away with it I’d play the version with Jay Z instead.

Well, not quite. As you can see, the product ended up being more like New Math than a Punnet square but I liked the original title and have no idea what I’d call this post. Anyway, this idea would give students a totally different view of a character if you did it and it would show their understanding of the character (historical or literary) if they did it. Throw in some subtraction, squares or division and things could get a lot more complex. It certainly beats most character analysis/biographical sketches I’ve seen. You can see the progression of my thoughts below. So the original inspiration was this XKCD comic that had been bouncing around in my head for a few days and I woke up one morning with an idea. You could have a lot of fun crossbreeding famous people to get literary or historical characters (or the other way round). And, yes, I do often wake up thinking about crossbreeding famous people for educational purposes. As I looked up Punnet square information (it has been a while) I realized a few things. One, it isn’t spelled punnit square. Two, I’d forgotten that they were either really simple or fairly complex, at least for the limited use I wanted them for. So I scratched that idea but I still wanted […] 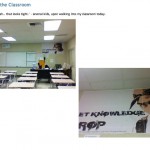 It really made my day to see ianvirgil actually print out and use the TuPac poster from this post (which was inspired by Dan’s post ). Funny how distance no longer matters- as they’re both in CA and I’m way to the right in VA. I’m feeling a mixture of pride (I love when things I’ve done are actually useful and used) and envy. Not being in the classroom sucks at times. There are certainly benefits but I really miss the kids and those moments when things really click in the classroom. It’s frustrating at times to do all this thinking about teaching and to have such a better understanding (as well as more tools) than I ever had before yet to be without a class of my own. I’ll have the chance to work closely with Terry Dolson and her Core class next semester. We’ll see if that helps.

I’ve been on the job for about two months with the staff and have realized one thing: email is dead. I get little to no response when I send a text email to my staff, so I’ve started to play with important messages for my teachers. For instance, I needed them to complete a survey and reminded them with this Bollywood themed message from Bombay TV. It hooked half of the MIA teachers with a good laugh. The staff stopped me for days to talk about it. When I received a run of emails concerning computers were not working, I created a reminder featuring a very young Bob Dylan (previous). The emails subsided, and now many of my teachers are quick to tell me that they have restarted a couple times when their computers are acting up. They just seem to listen better when I can get it across in an entertaining way. I guess some things never change. I know your students tune out the same way we do when something is visually monotonous. We are children of an instant, entertaining culture. So, here’s a suggestion: Think of that one rule in your classroom your kids are still having trouble with the second month of school. Are they standing up to sharpen their pencil while you are leading the […]