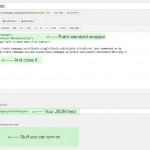 It sounds like an exciting new buddy movie . . . but it’s an attempt to better integrate elements of our Discourse install in WordPress using Benson (a neat plugin Mark made that lets you use Angular w/in WordPress). I decided to look into this after seeing this example using Twig. Ordinarily, I’d do something like this using Discourse’s RSS feeds and probably manipulating it with FacetWP. I’m opting to look at these other options for a few reasons. One, with WordPress expanding JSON I want a better idea of how all that works in comparison to RSS. Two, I don’t really like duplicating all this content through the syndication option if I can achieve the same effect in other ways. I’m not so worried about space (although I don’t like to waste it) but there are occasionally issues with updates and duplications using RSS the way we do. I wonder if JSON will straighten some of that out. Angular also opens up a realm of options as you get closer to writing code rather than relying on plugins. And finally, I want to knit Discourse more tightly to WordPress. That’ll matter because of the strong resistance to “another site?” responses. What can you get out of Discourse via JSON? Short answer- lots of stuff. Much like WordPress you can […]