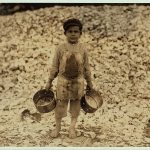 Manuel, the young shrimp-picker, five years old, and a mountain of child-labor oyster shells behind him. He worked last year. Understands not a word of English. Dunbar, Lopez, Dukate Company. Location: Biloxi, Mississippi. (LOC) flickr photo by The Library of Congress shared with no copyright restriction (Flickr Commons) 1 I had a site we used for the Great VCU Bike Race course that’s been sitting around. I knew it had lat/lng data for lots of urban bicycle related posts. My goal was to get it into Google Maps via the REST API. Get Custom Field in JSON By default you won’t see custom field data in your JSON endpoints. There are some plugins to make that happen but I wanted to take a stab at doing it myself. Given the documentation, it was pretty trivial.2 The code below in a plugin or the function.php file would make the lat_long custom field show up in the post JSON. Using this URL, I can get the 30 most recent posts.3 Some Map Stuff Google wants lat/lng separate but it’s coming in as one item split by a comma. These little functions split it up nicely. In javascript, split breaks up a string by the defined element (comma in this case) and returns the pieces as an array. Since I’ll get two pieces […]