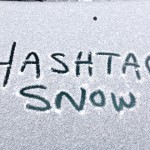 flickr photo shared by AndrewDallos under a Creative Commons ( BY-NC-ND ) license I’ve been thinking a bit about how hashtags function on Twitter when used in course in particular. These thoughts are shaped mainly by seeing how #vizpoem, #curiouscolab, and #thoughtvectors have played out vs some of the other hashtags we’ve used like #vcualtlab or #vcuglobalhealth. There’s not a right way or wrong way to do this but there are certain things that seem to happen when the structure of the hashtag is less tied to an institution. The VCU prefix pretty much means that only people within the VCU structure will use that hashtag. It is less likely it’ll become part of a larger structure for other people to use when thinking about/organizing the topic. #thoughtvectors is an example of a hashtag that has spread beyond the course in both time and people. While I believe Gardner coined?/hashed? the hashtag based on Doug Engelbart’s quote, its first use on Twitter was by Jon Becker (at least according to this site and this site). Since that time it was used extensively during the course (nearly 4000 times) but it’s still being used today long after the course officially ended. More and more it’s used by people who have no obvious relationship to the course and probably no knowledge of […]