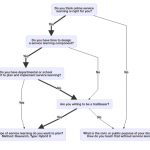 I was building something in JSPlumb the other day1 and it prompted Tim to ask if we could build flowcharts based on survey responses so that respondents could see their choices in context. I thought we could and it led to this simple example2 that I think will have lots of interesting and broad applications down the road. This is one of those things that is halfway to an actual answer. It gives you the foundation to build specific things pretty quickly without a lot of technical knowledge but it does require attention to detail and understanding some logical3 writing patterns. My semi-coding audience may be mostly in my mind but it works for me and maybe for our ALT Lab R+D group. If this ends up expanding well, it’s possible Jeff will make it into a more substantial solution plugin like he’s done so well with a number of other things that started out this way. Foundational Elements This uses Gravity Forms and a little plugin I made to add the Mermaid css and js to posts. The plugin also adds a little content filter to add the data to WordPress without it getting messed up by the editor. I went back and forth on which way I’d create the flowcharts. I opted for Mermaid because I though the […]