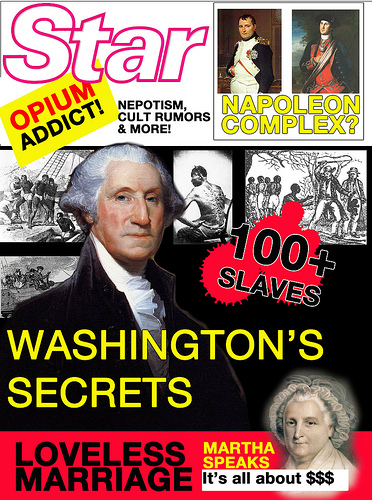 So I was inspired by this post and came up with the following idea. Basically, you research a historical hero, one of those unimpeachable people students have been forced to memorize facts about since kindergarten. Only this time you’re researching the figure as if you were a reporter for a semi-sleazy tabloid. Let’s keep it semi-sleazy so there’s a core of fact to anything reported. Like Washington marrying for money, in the example, may be true. No real facts either way but some innuendo and some sources I could cite. You could do something simple like creating the cover or make it much deeper and have the class construct a whole magazine analyzing an individual or period.

The concept has some depth to it. One, students are analyzing and imitating the writing and design style used in tabloid magazines. Two, they’re researching the historical figure and seeing them as much more of a human. Historical figures tend to become caricatures which are then referred to with great longing and nostalgia. I think it’s really healthy to see these people as having flaws and compare how the media of the day treated them to how we see them now. This goes for whole eras, not just individuals. It opens up a lot of conversations about the media today as well. How would Glenn Beck be commenting on George Washington?

The whole things is really flexible and only loosely fleshed out here. The lawyer’s son in me does caution you about doing this sort of thing in conservative places if you’re not sure of your audience reaction. That being said, there are worse things to lose than jobs.

Keep in mind you could also do the reverse and do a PR spin of “evil” people. Although that might be even more dangerous.

1 All the info for this example was taken from G.W. Wikipedia page. It is not meant to be scholarly research nor exhaustive. I also left out the part about George having animal teeth in his mouth.

5 thoughts on “The dark side of George Washington”