I was asked to take pictures at the kids’ school for the Winter something or rather. It was a combination of an art show, an unveiling of the holiday lights, and a concert representing a variety of classes and clubs.

I’ve been watching a video series from National Geographic on taking great photographs. It certainly leans heavily towards nature and landscapes but it also includes a good bit on taking interesting pictures of people and trying to tell a story with your photos. I thought this would be a good time to try to apply some of the things I’d learned about in the course. It certainly re-aggrevated my Ira Glass Taste Gap.1

One of the challenges I find in this kind of photography is letting my own opinion intrude just enough. My goal is to try to be inclusive and to take good photographs. Sometimes artistic photographs and coverage photographs converge but I take many of the photos because I want people to feel part of the community. And sometimes a dramatic and interesting photograph isn’t the kind of thing you’d include in event coverage. Certain people and art is also just more dramatic and makes for better pictures. I have to avoid over-representing them.2 I also just can’t bring myself to ask people to pose for photos. It’s a thing that people like, but I don’t like to manage people like that. I tend to use the camera as a shield to prevent excessive interaction with people at large events. That’s a failing for this type of photography.

I’m trying to do two things. I want to show good examples of the art and give a good view of the community enjoying the art. I feel I did a decent job here. 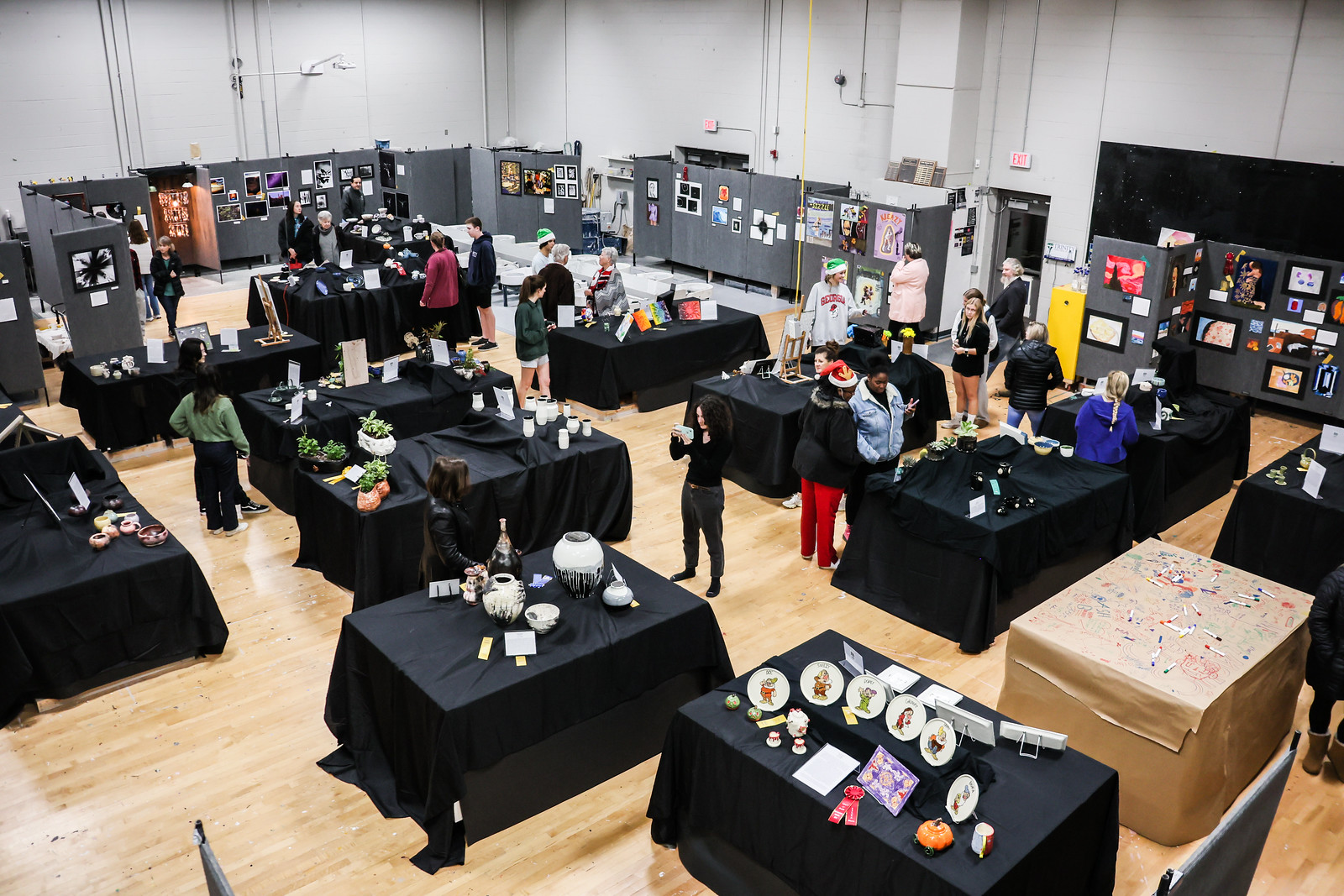 In the main art room, there is a small second story area for the teacher’s office, storage etc. I went up those stairs to get a different view on the space. I think it works to show the size of this portion and it’s a nice change of perspective. I might have preferred a drone shot directly overhead but you work with what you have. It does a much better job than this shot taken from a more traditional perspective. 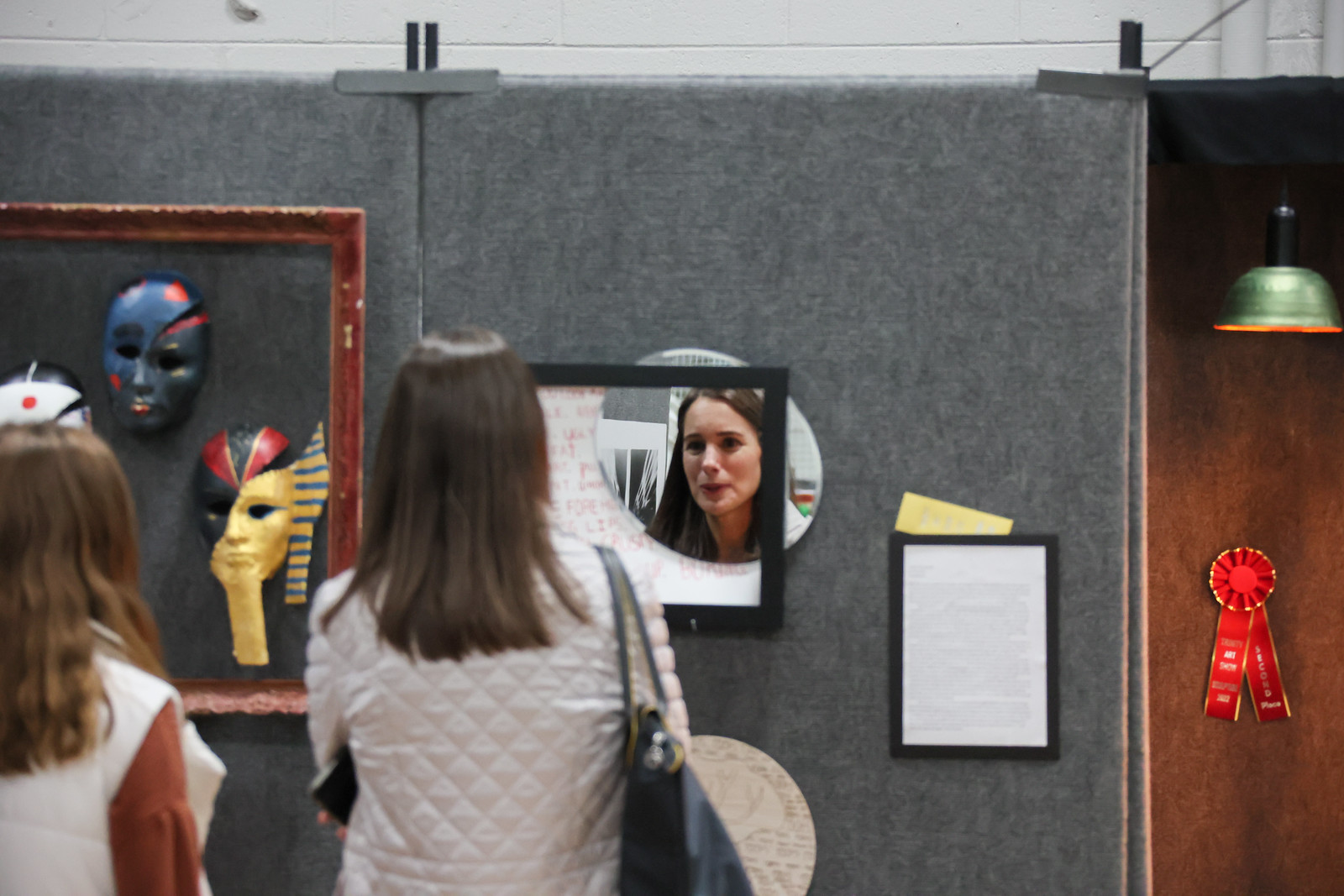 This one almost worked. One of the art pieces had a mirror and I took a few shots trying to get people in the reflection. This is a bit blurry. I should have come back to this a few more times. 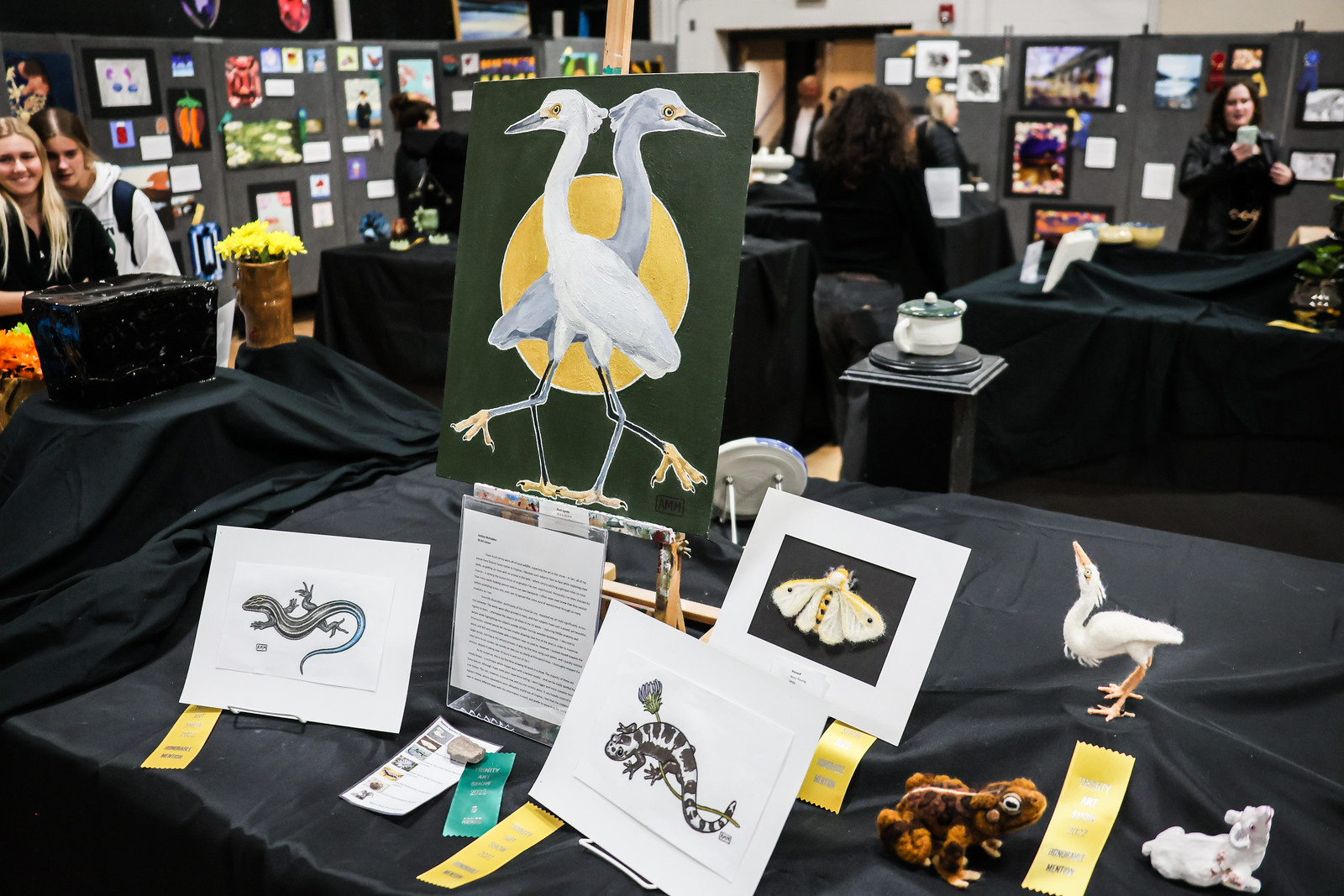 This is a pretty typical picture of one student’s collection. I was trying to show the diversity of objects but I think changing height here for a lower perspective would have helped isolate the art a bit more. Given unlimited lens options, I’d have gone with a wider lens and a shallower depth of field. 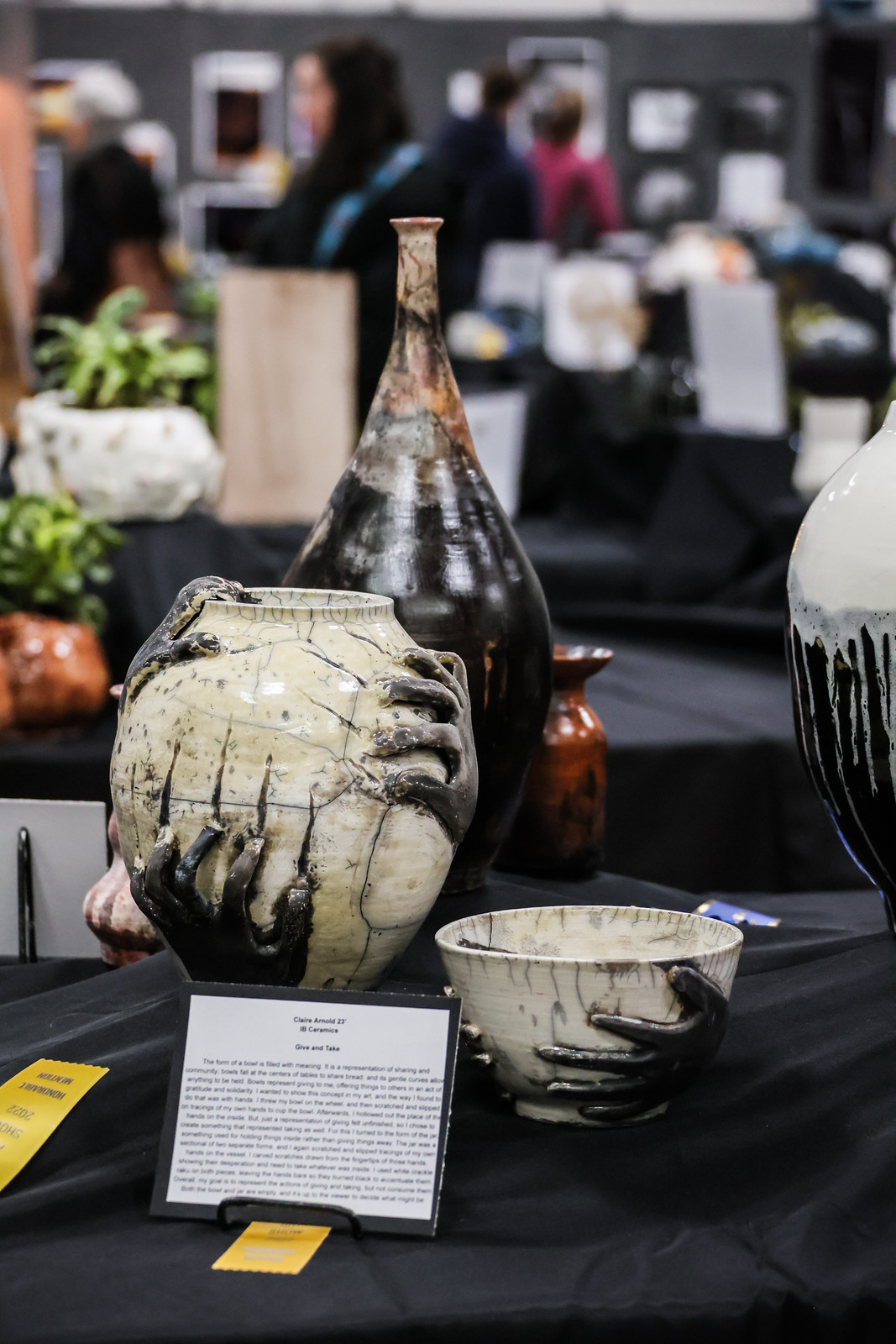 In this shot, I did drop lower and I feel it isolates the pottery better. 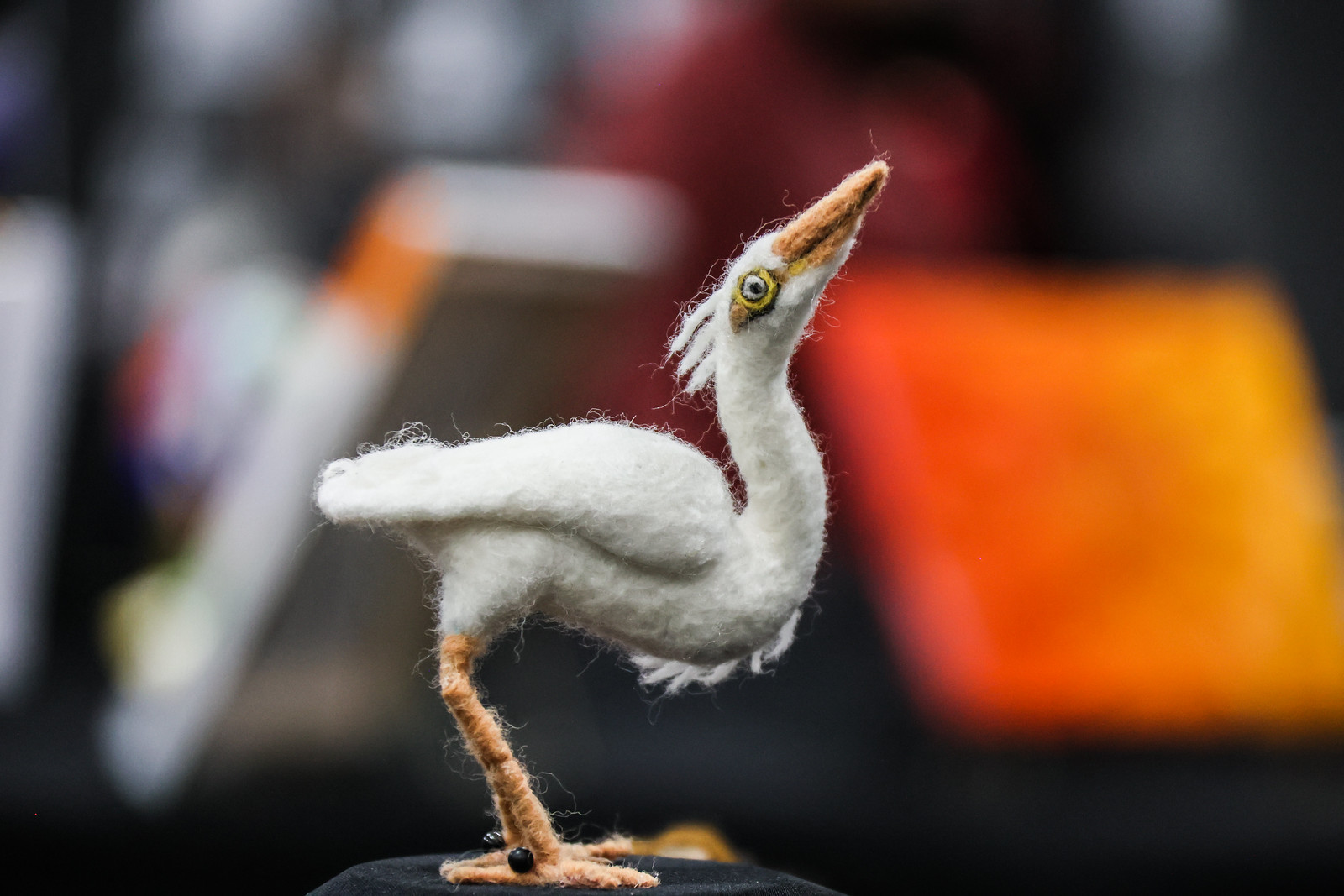 Similarly, I got good separation and bokeh on this shot. I might have worked around a bit more to get better colors behind it. I do love this nature-focused work. 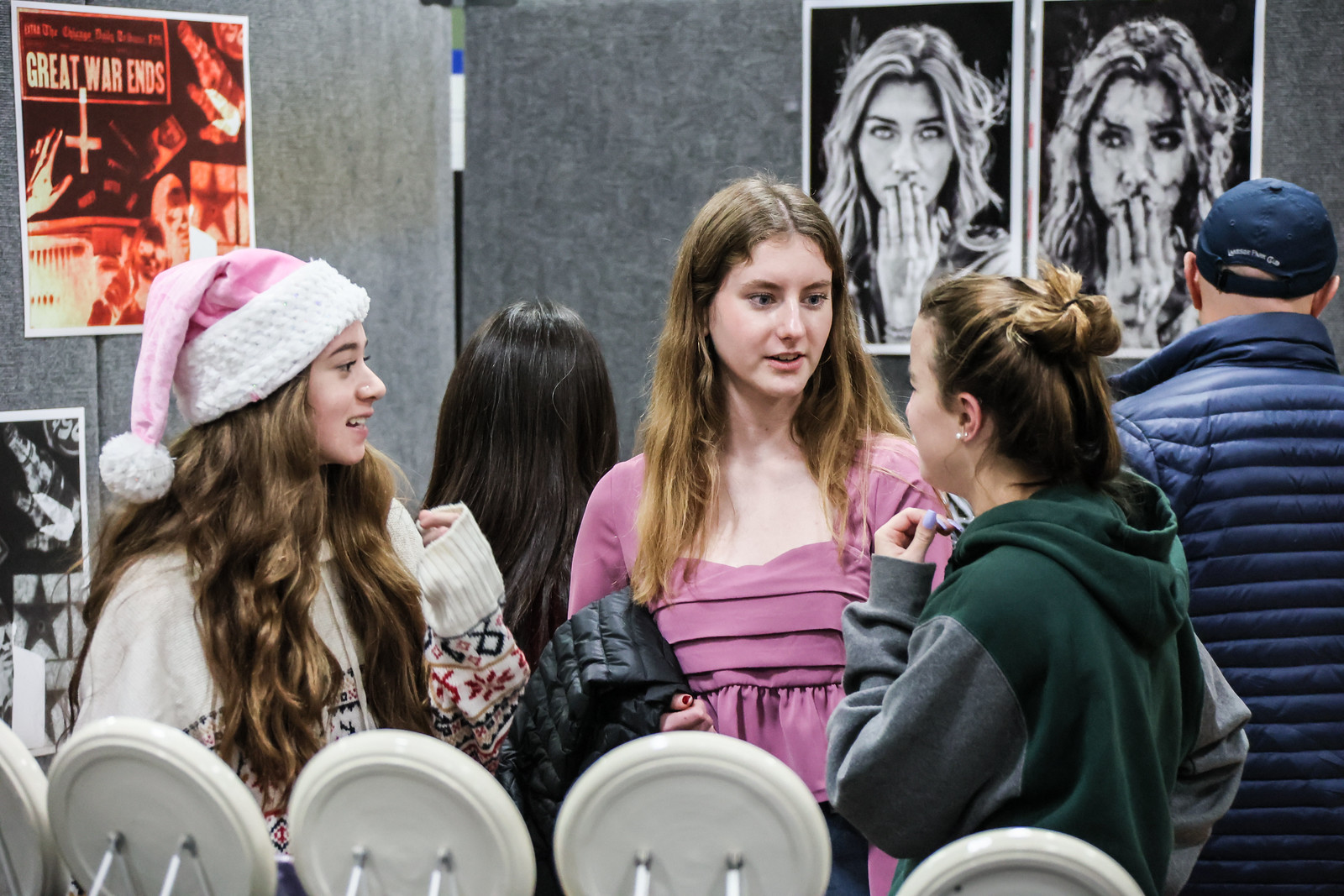 I like the people in the foreground echoing the black and white photographs in the background. I had a more dramatic example with more similarity between the expressions but deleted it as a bit too aggressive for this type of photography. I probably need to think all that through a bit more. 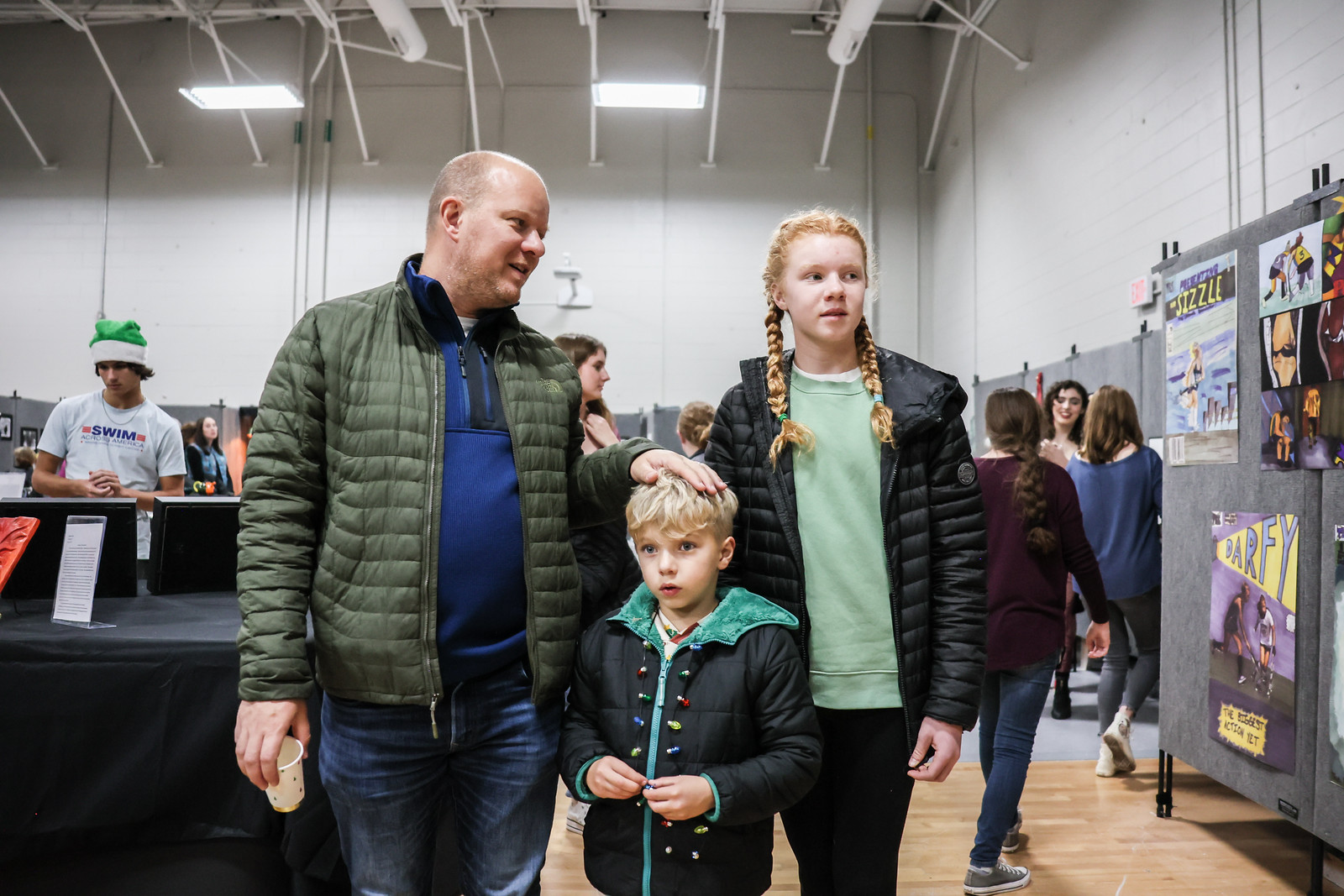 Not a typical family at the art show photo but I like it. 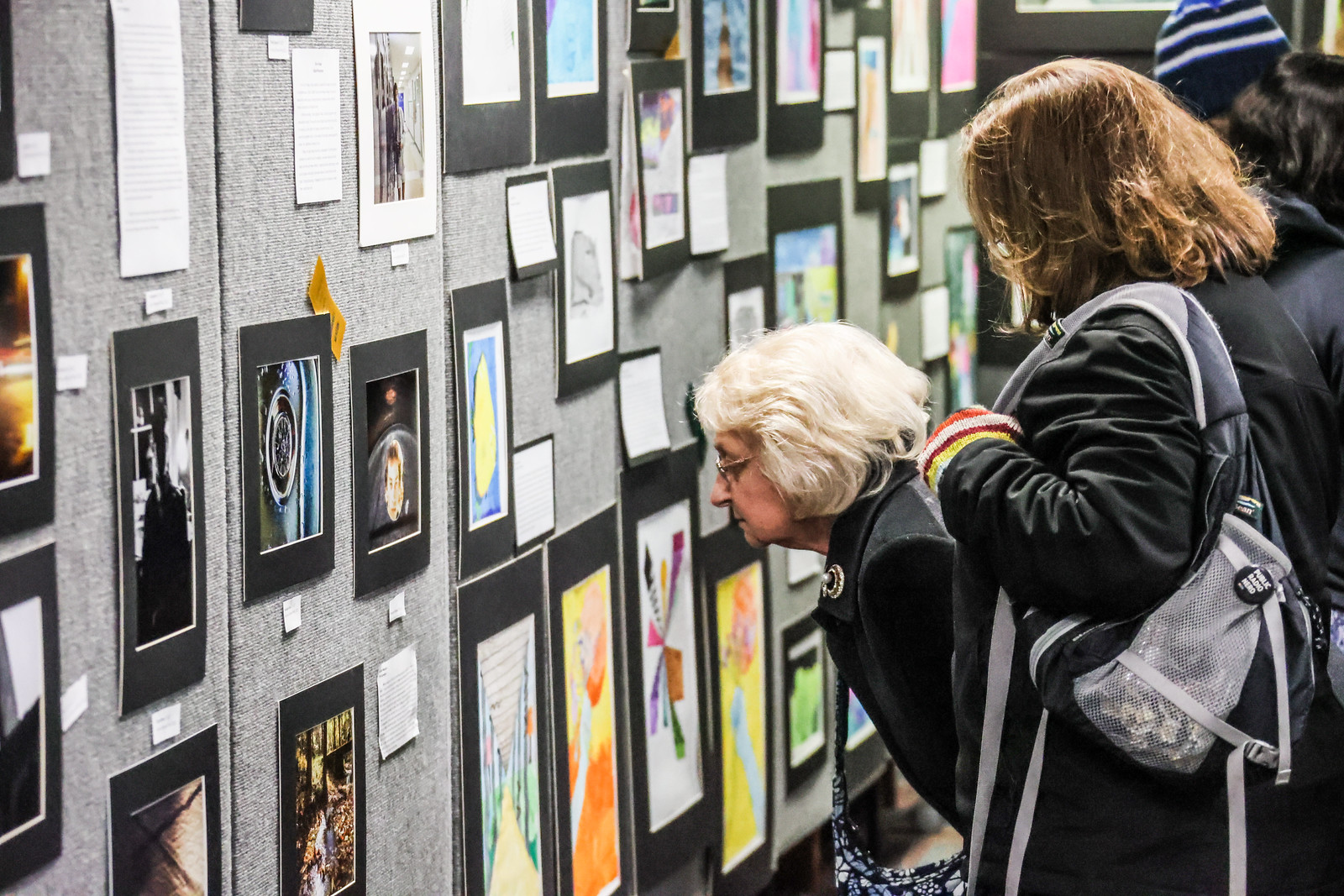 Just out of focus. It’s one on the edge where I think it adds humor but doesn’t make fun of the person. It also shows that people really read the artist statements.

The lights were a challenge. I did not have a tripod. I had an external flash but I haven’t used it since dabbling with it a number of years ago. I was trying capture good pictures of both lights and people enjoying them. I thought I’d play around a bit with capturing some motion through slow shutter speeds. 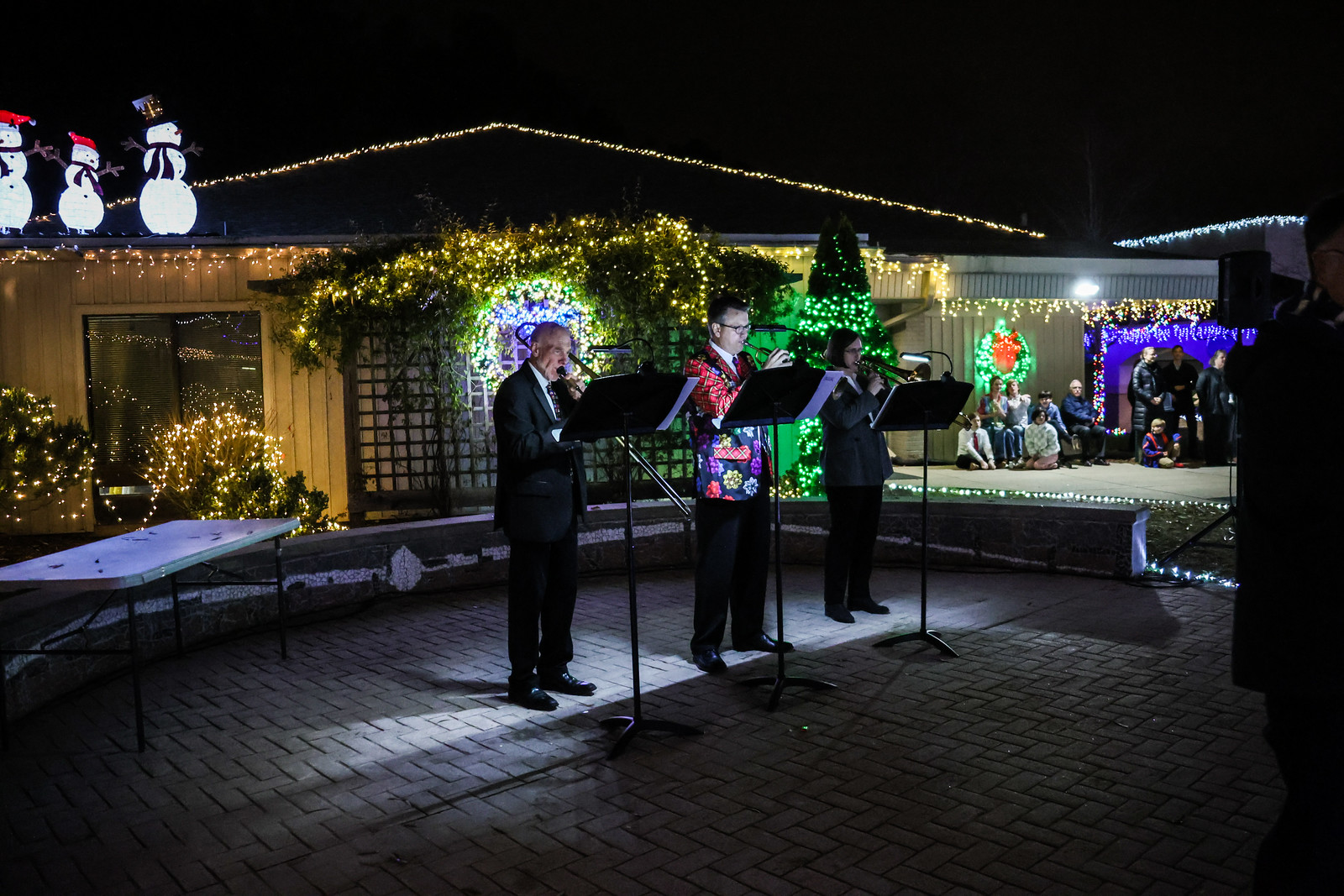 This was one I liked. The lights behind combined with the lights from the music stands created some isolation and enough illumination to make the musicians stand out. 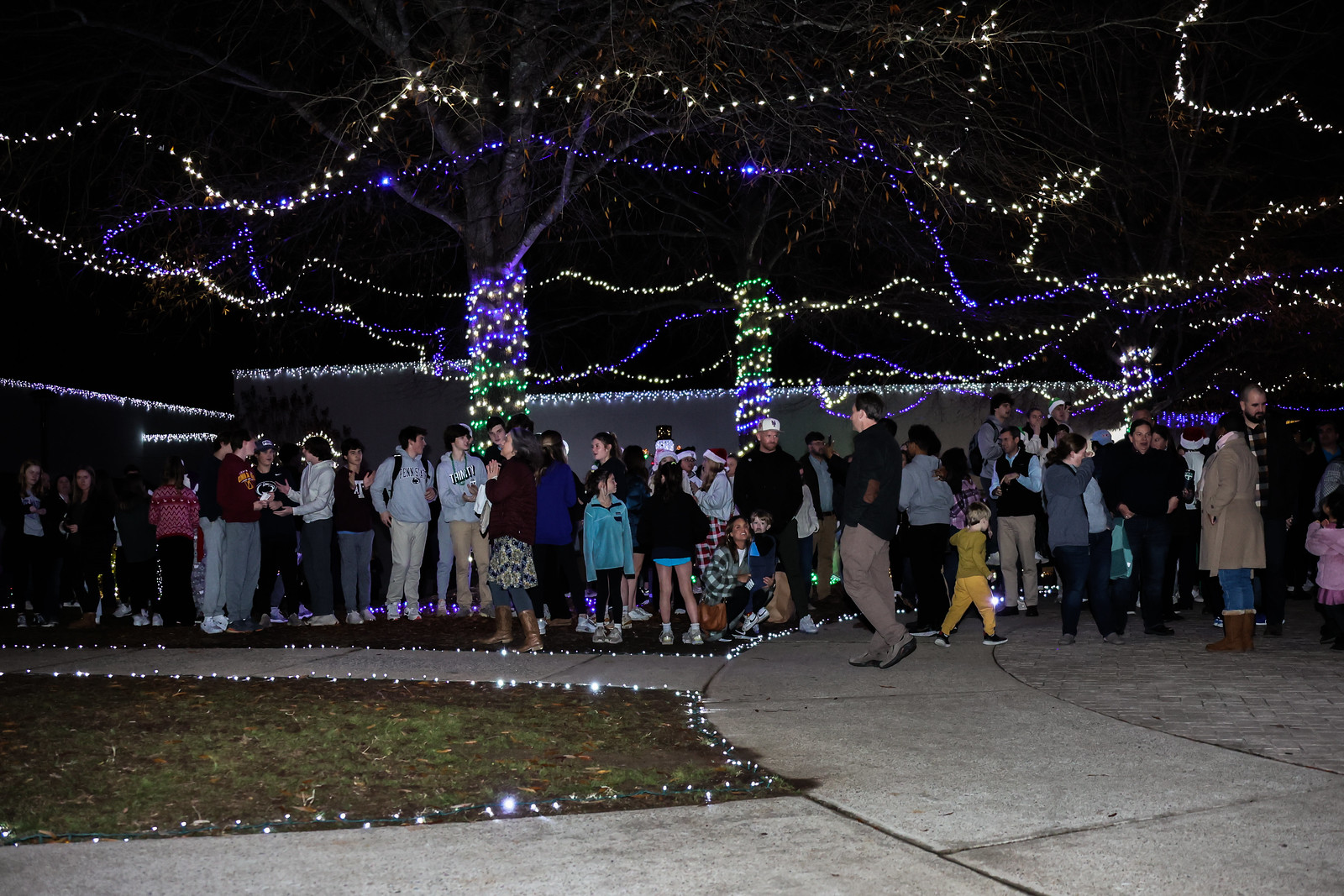 Here’s one of the flash on pictures. It feels like a crime scene. I do not like them at all. Using flash well in these scenarios is going to take a lot of practice. Never a good sign when you’re watching a “how to” video on using the flash the night before. I also need a tripod but I also don’t really want to carry a tripod. 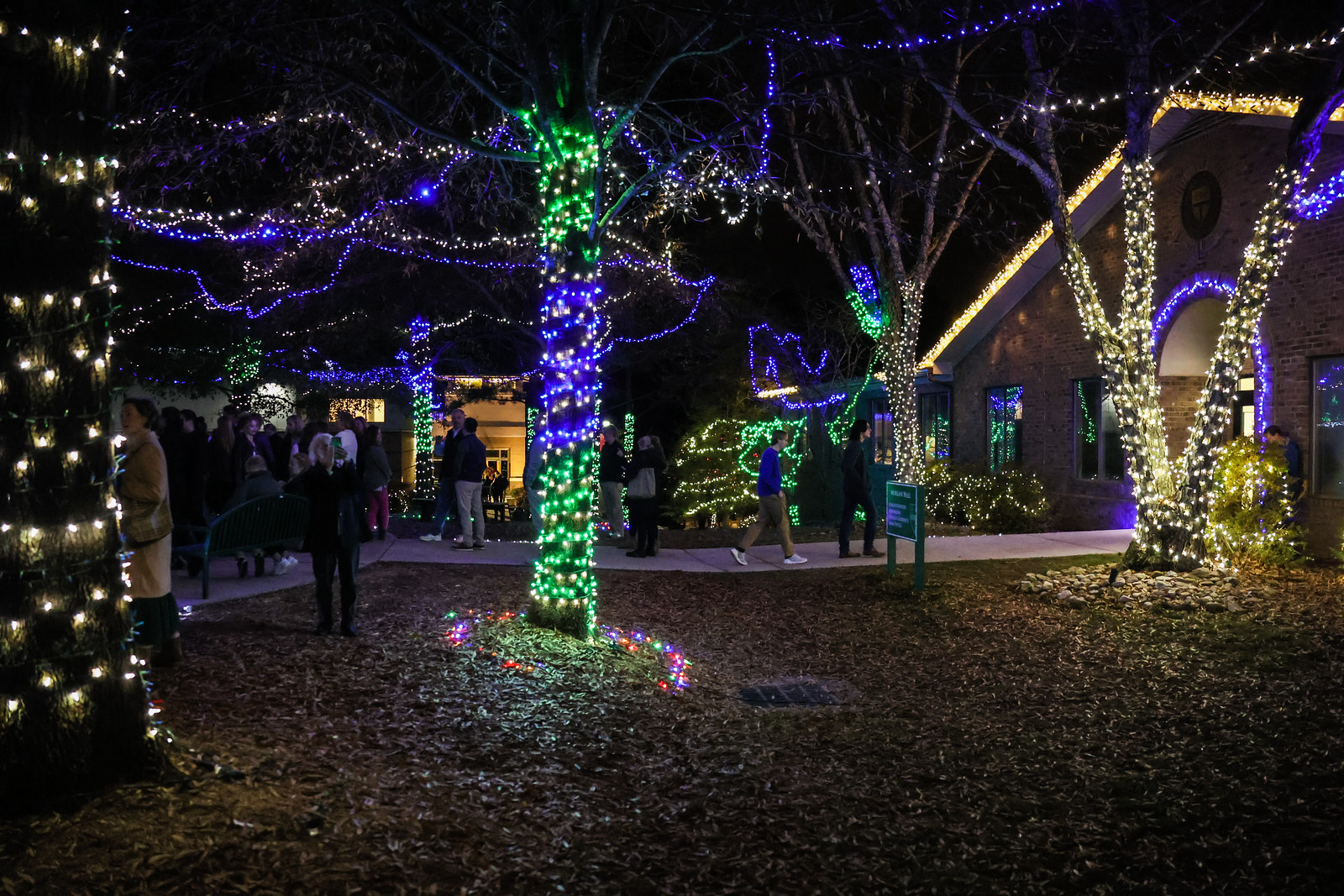 This non-flash photo doesn’t get the people as well but I vastly prefer the vibe. 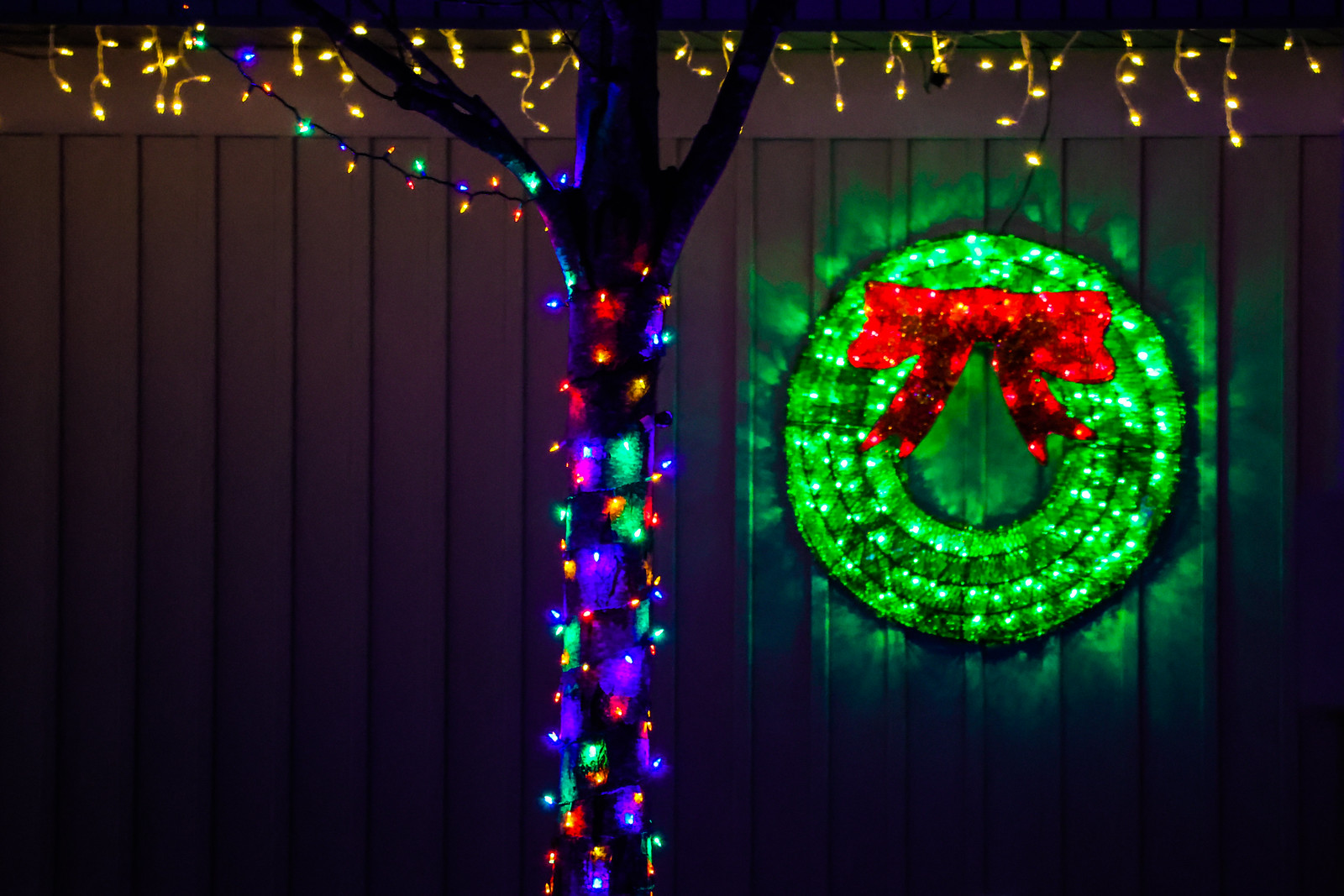 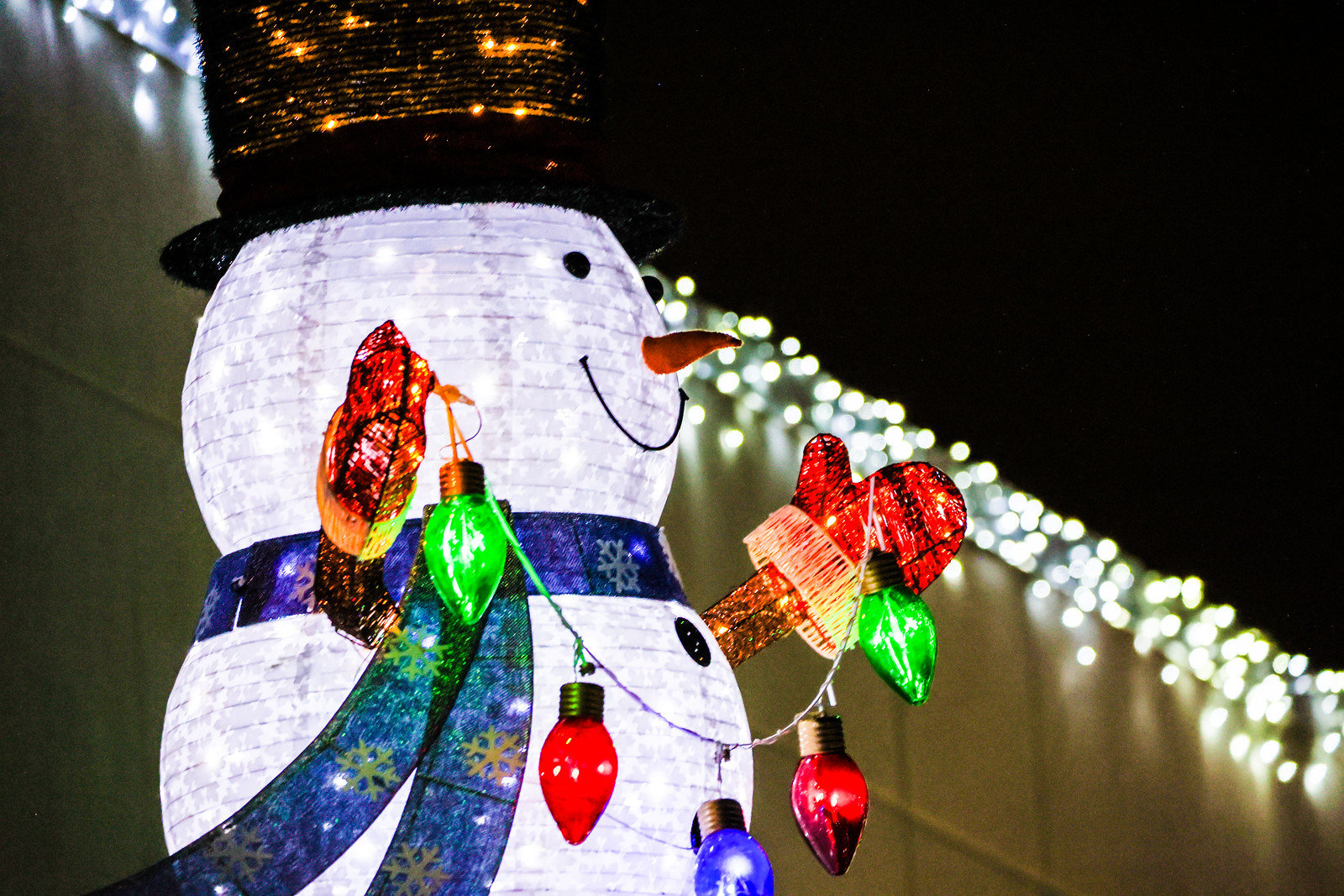 I tried to have some fun with the bokeh aspect by zooming in on large elements and letting the lights in the foreground or background blur in interesting ways. 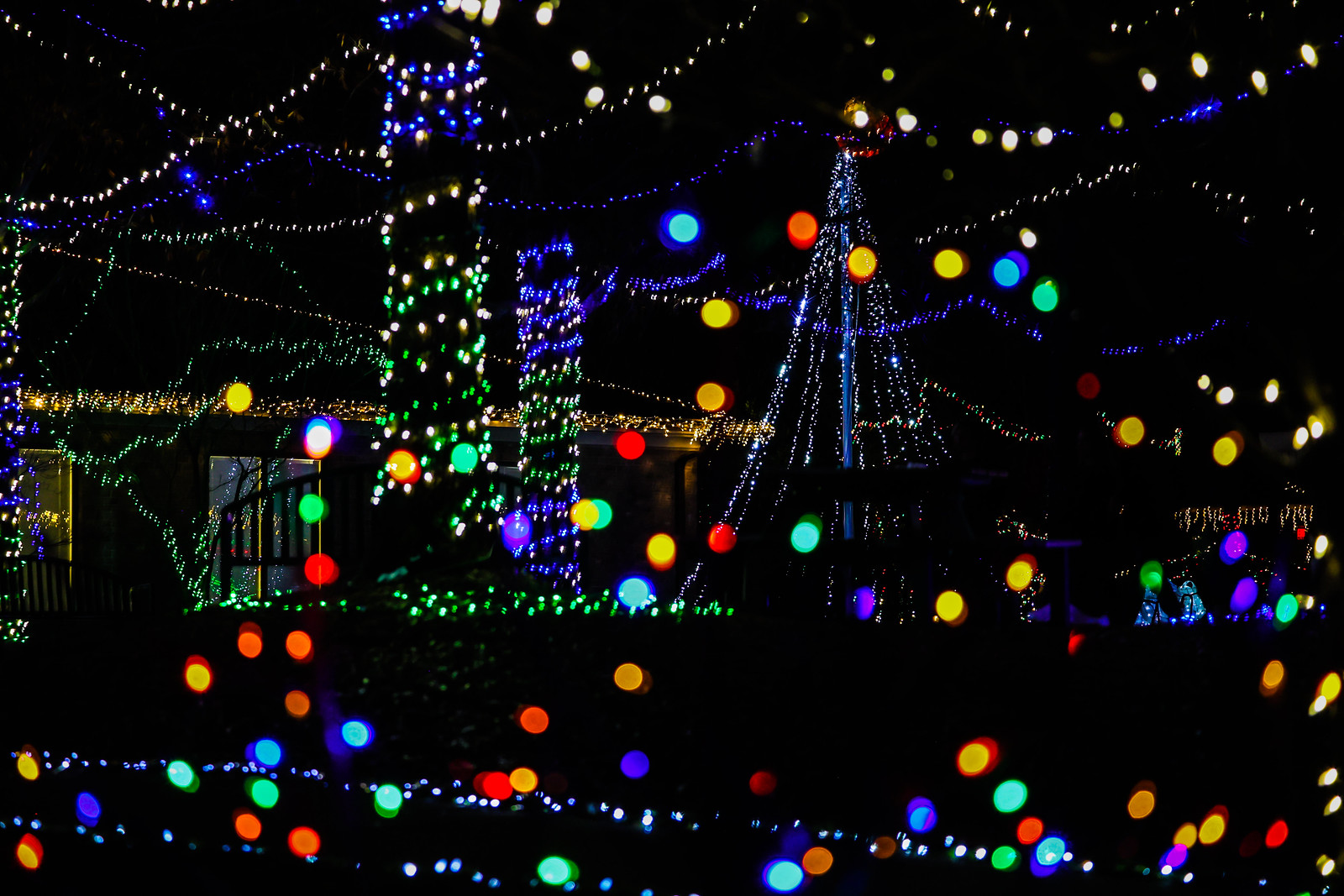 This came close to a foreground blur working out but doesn’t quite do it.

This is a bit more familiar territory. I tried to play around a bit more this time around with slower shutter speeds. I was also able to move a bit more but was still more constrained than I would like. 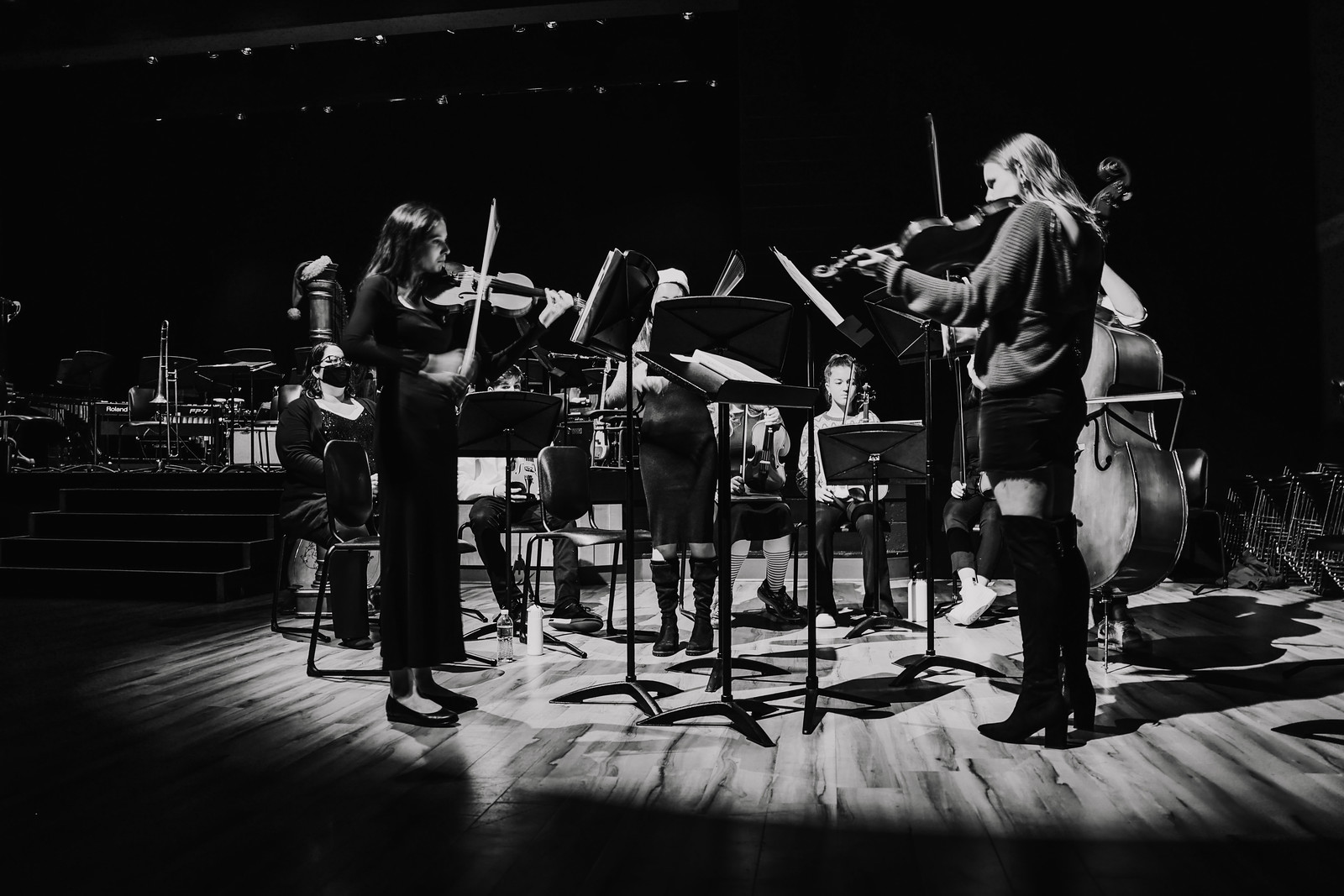 More than a bit dramatic (especially with a high contrast b&w treatment) but I felt it got enough movement to be interesting and violins are dramatic anyway so . . . 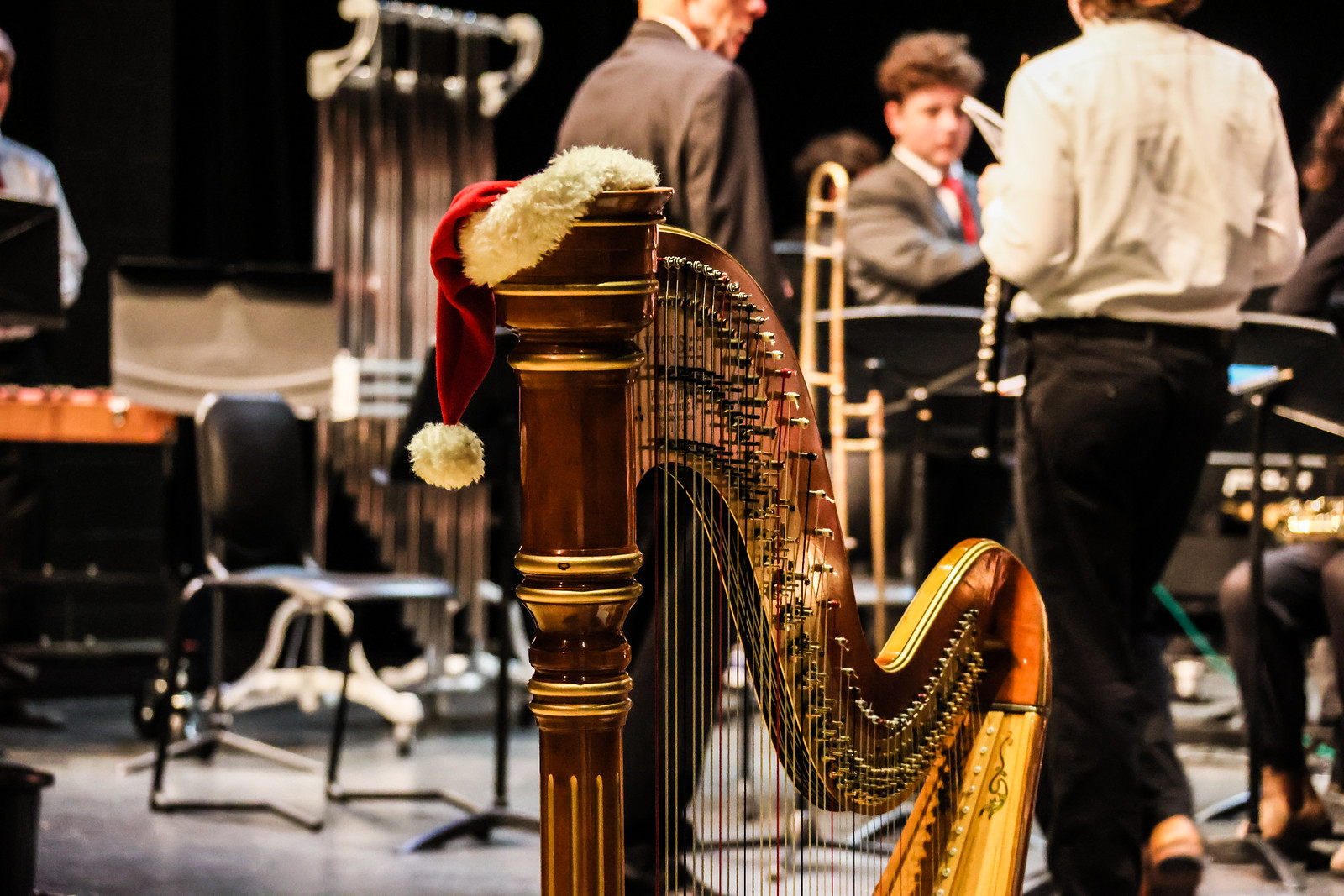 Probably a bit too obvious but the colors were hard to resist. I’d have liked a less busy background. 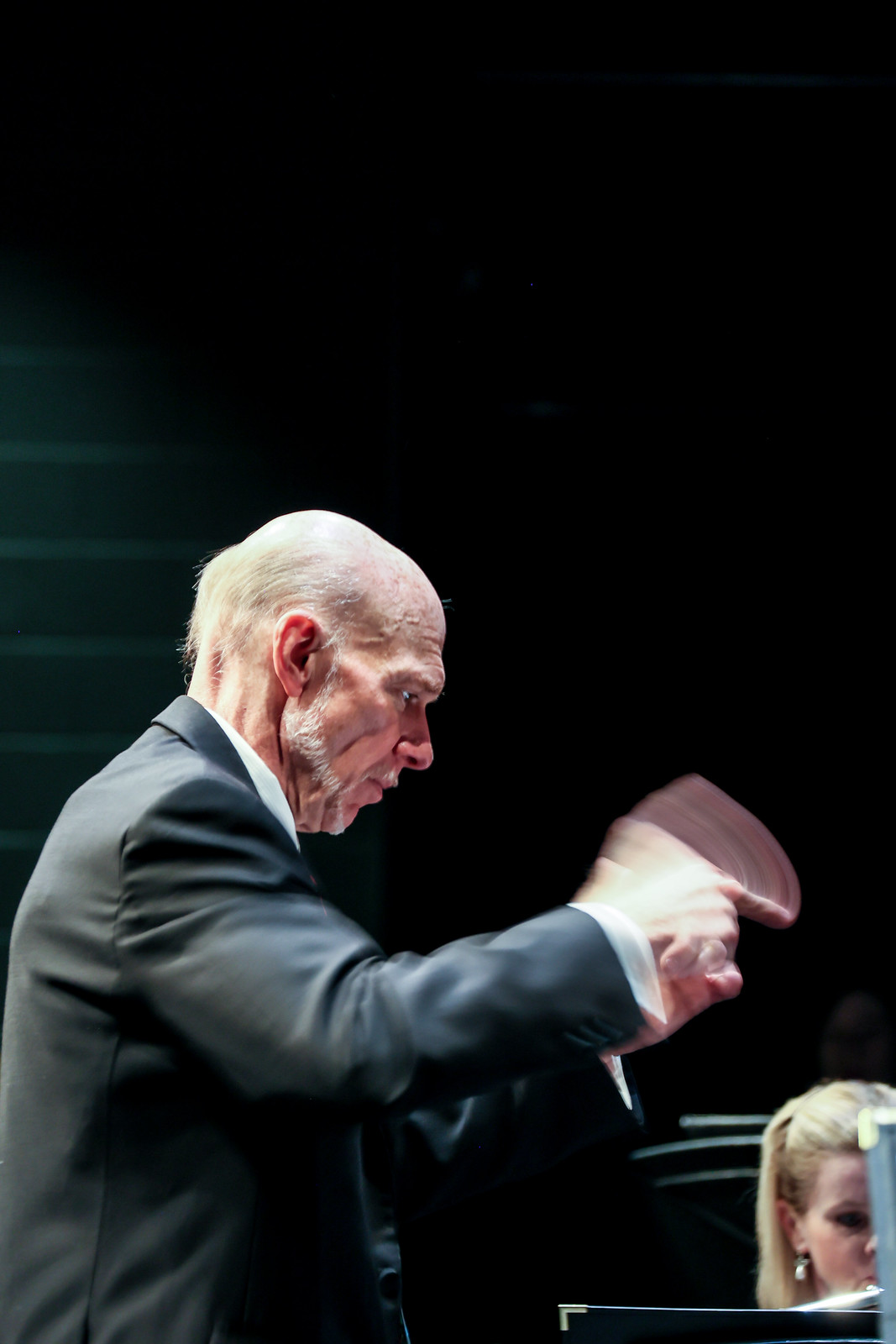 Lights coming from behind but the motion of his hand is decent while keeping his face pretty clearly focused. 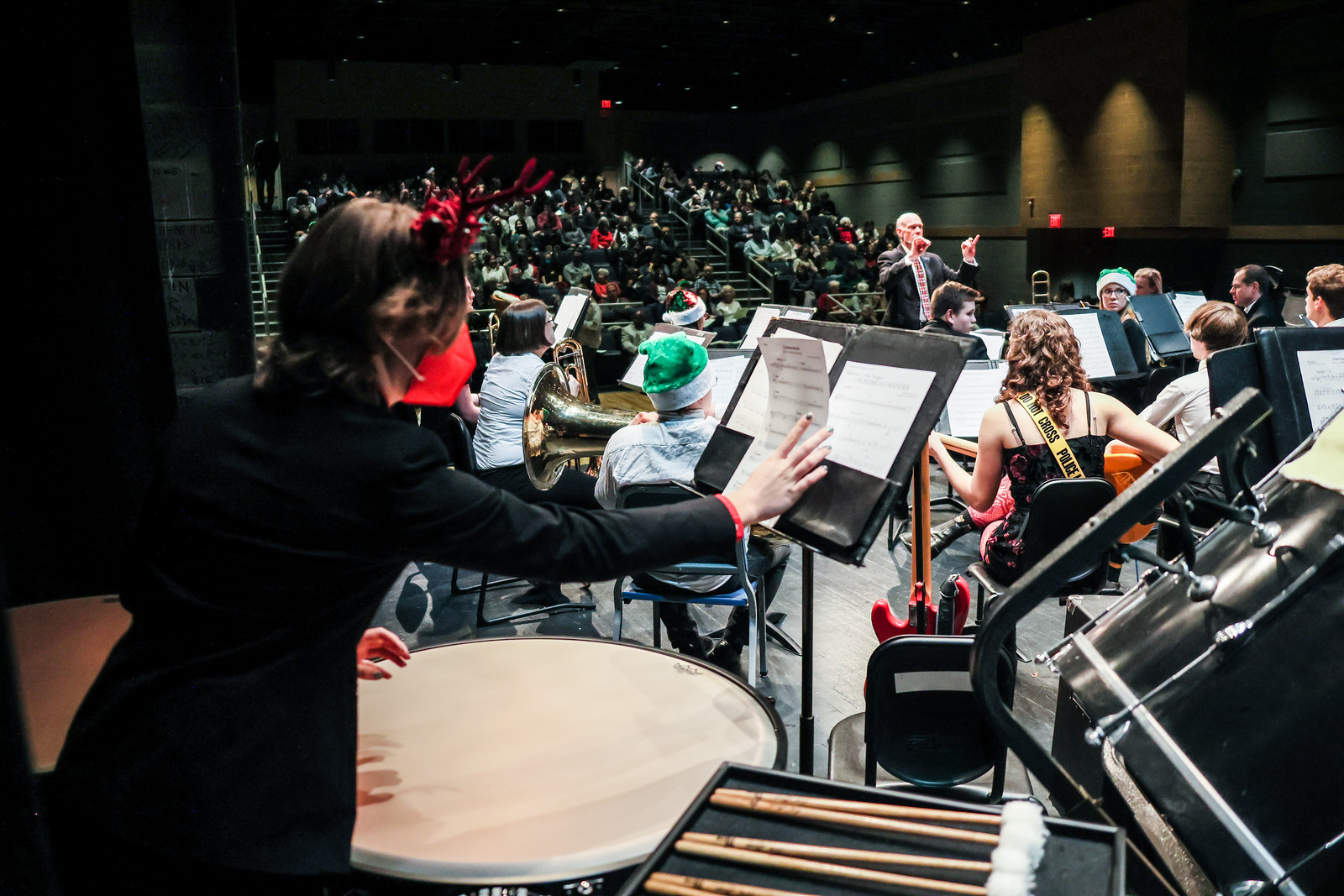 I like how this shot was coming from the performers’ perspective and I like the blurry-focus-blurry layers. 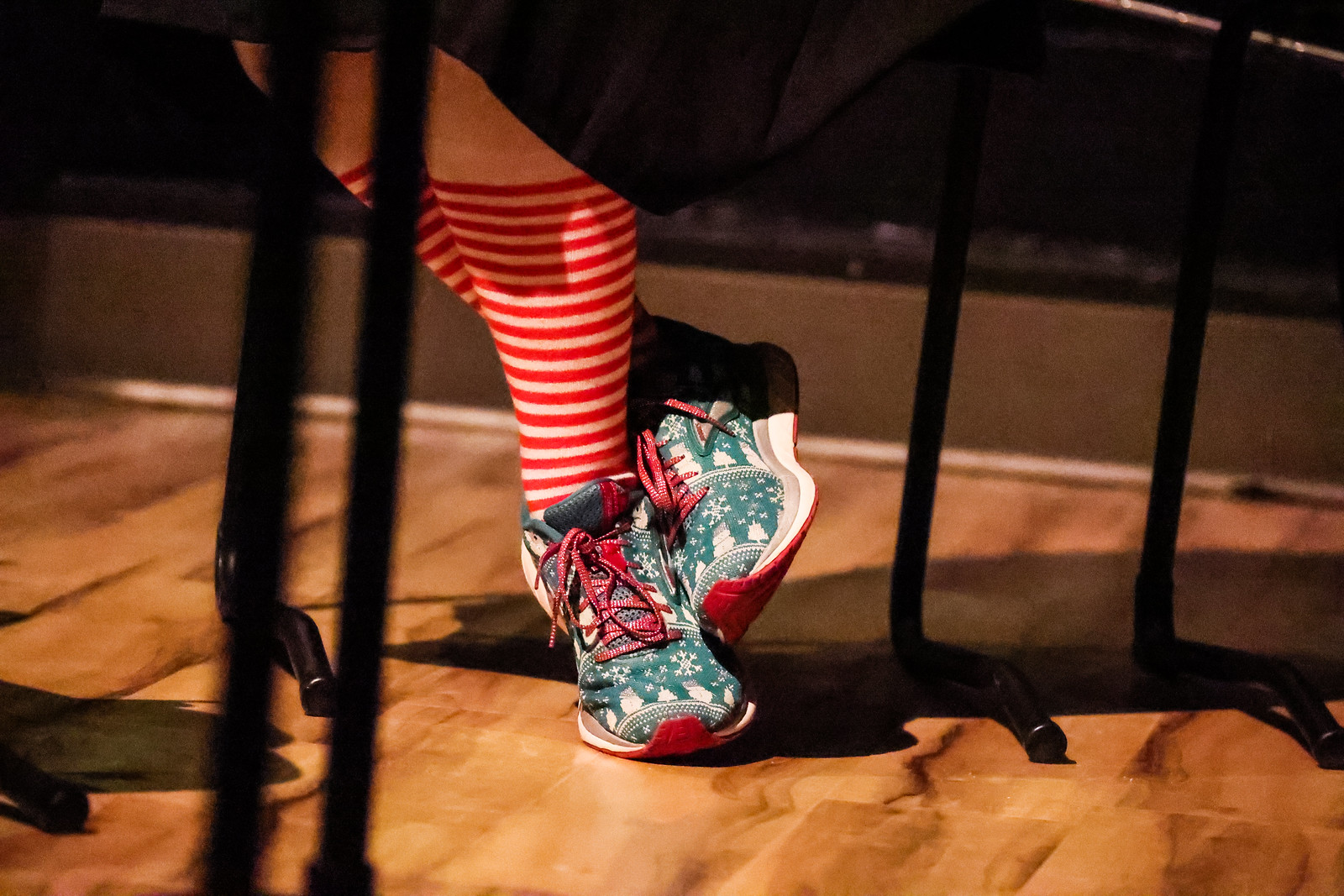 Just trying to capture some details that might be overlooked that are fun and tell the story of the event. These shoes/socks seemed to fit the bill. 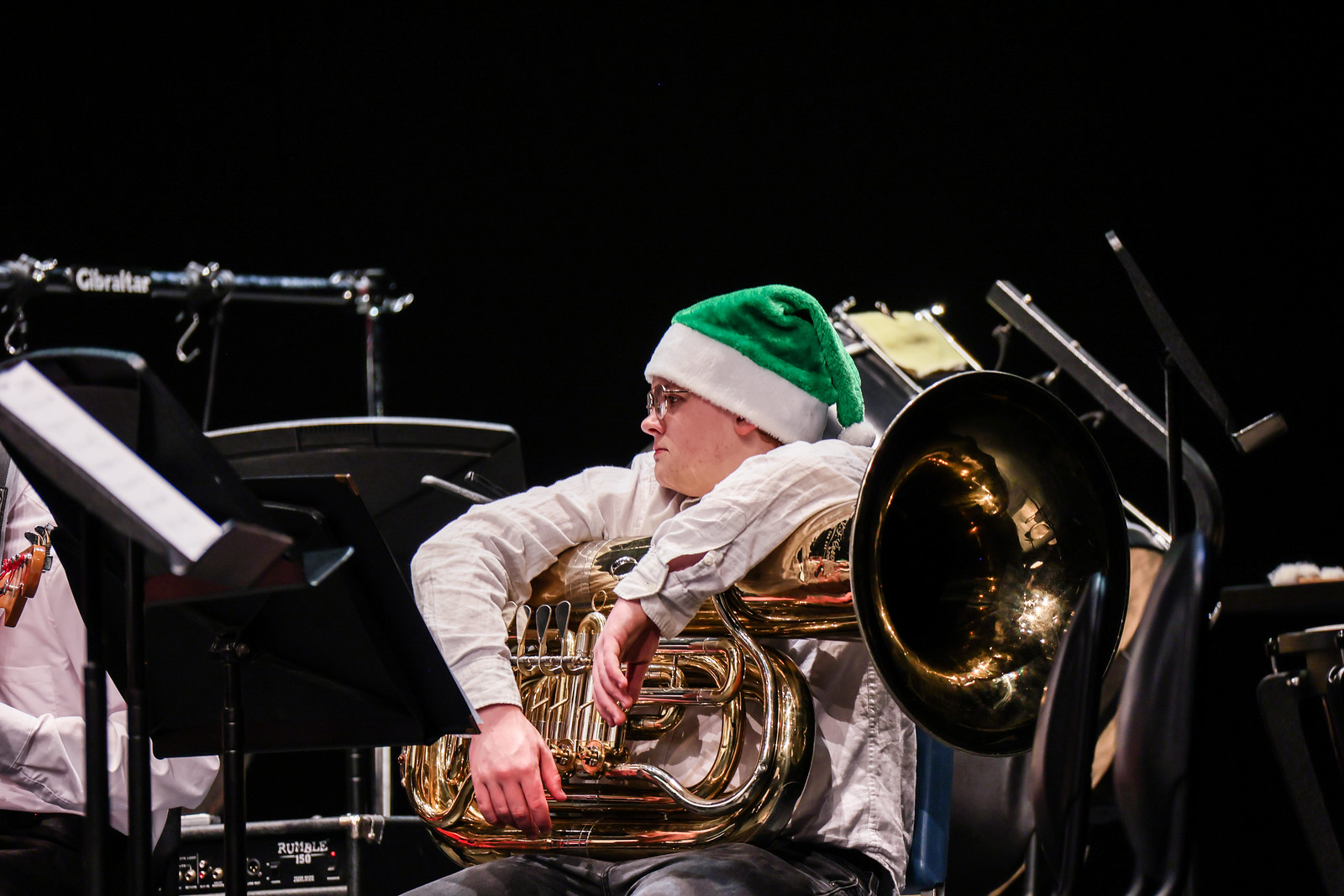 A bit of comedy maybe. That tuba is big and he would rest like that occasionally. I also just liked all the brass. 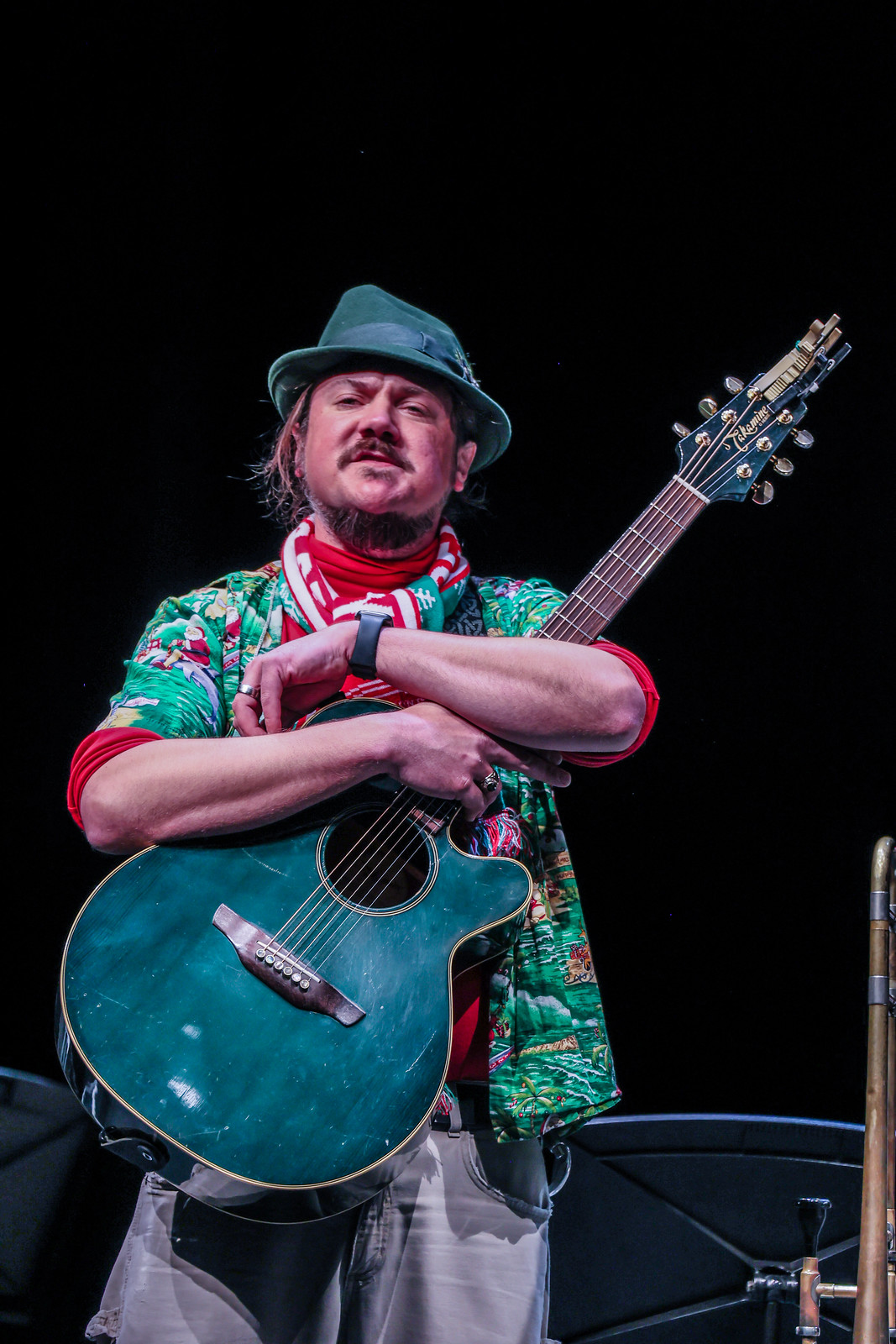 I botched most of his pictures in the last concert because I couldn’t deal with the weird lights. These worked decently and the background ended up being a nice solid black. 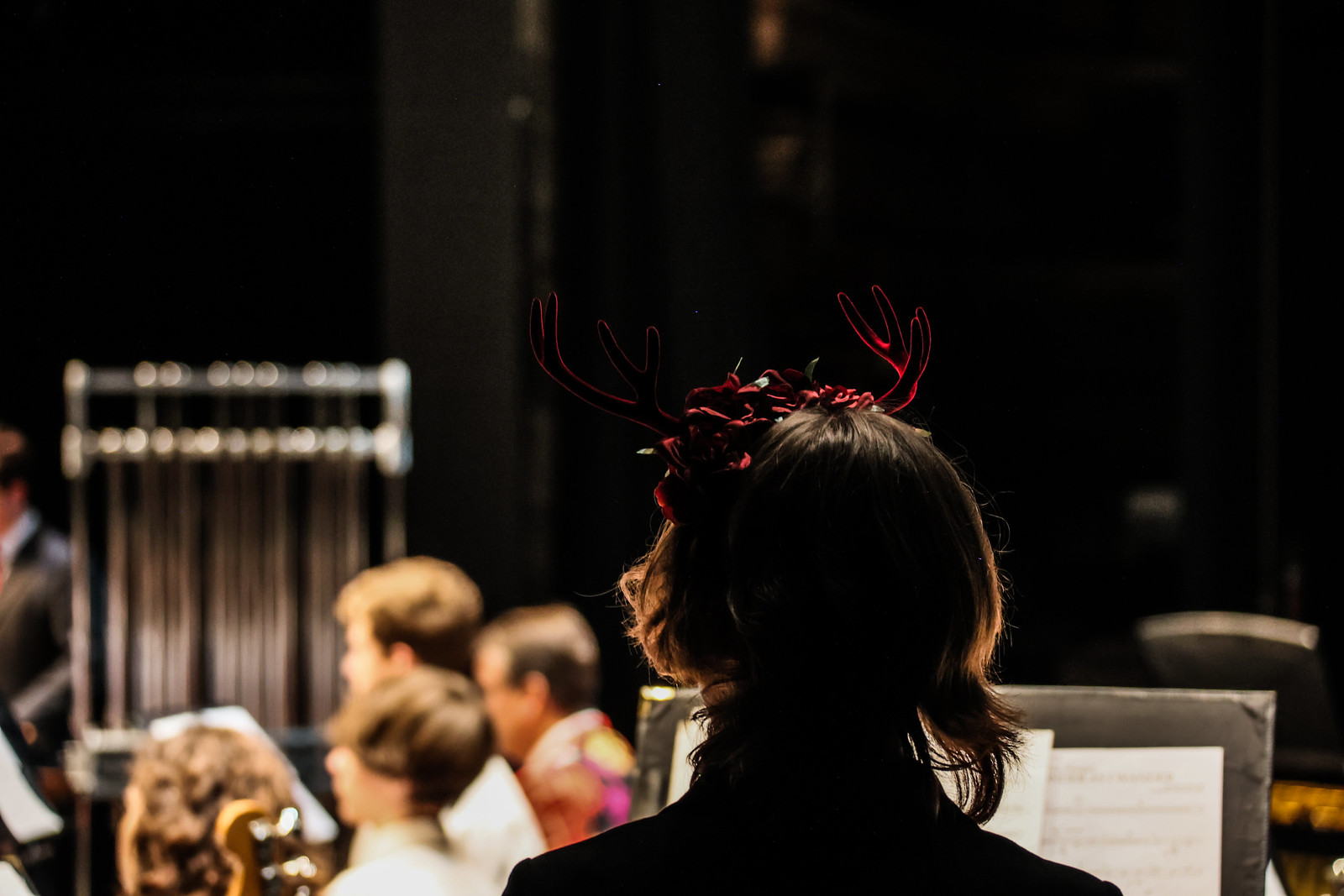 Dramatic. Some rim light. Horns. Probably not a good coverage shot but this student creates some unique photos. 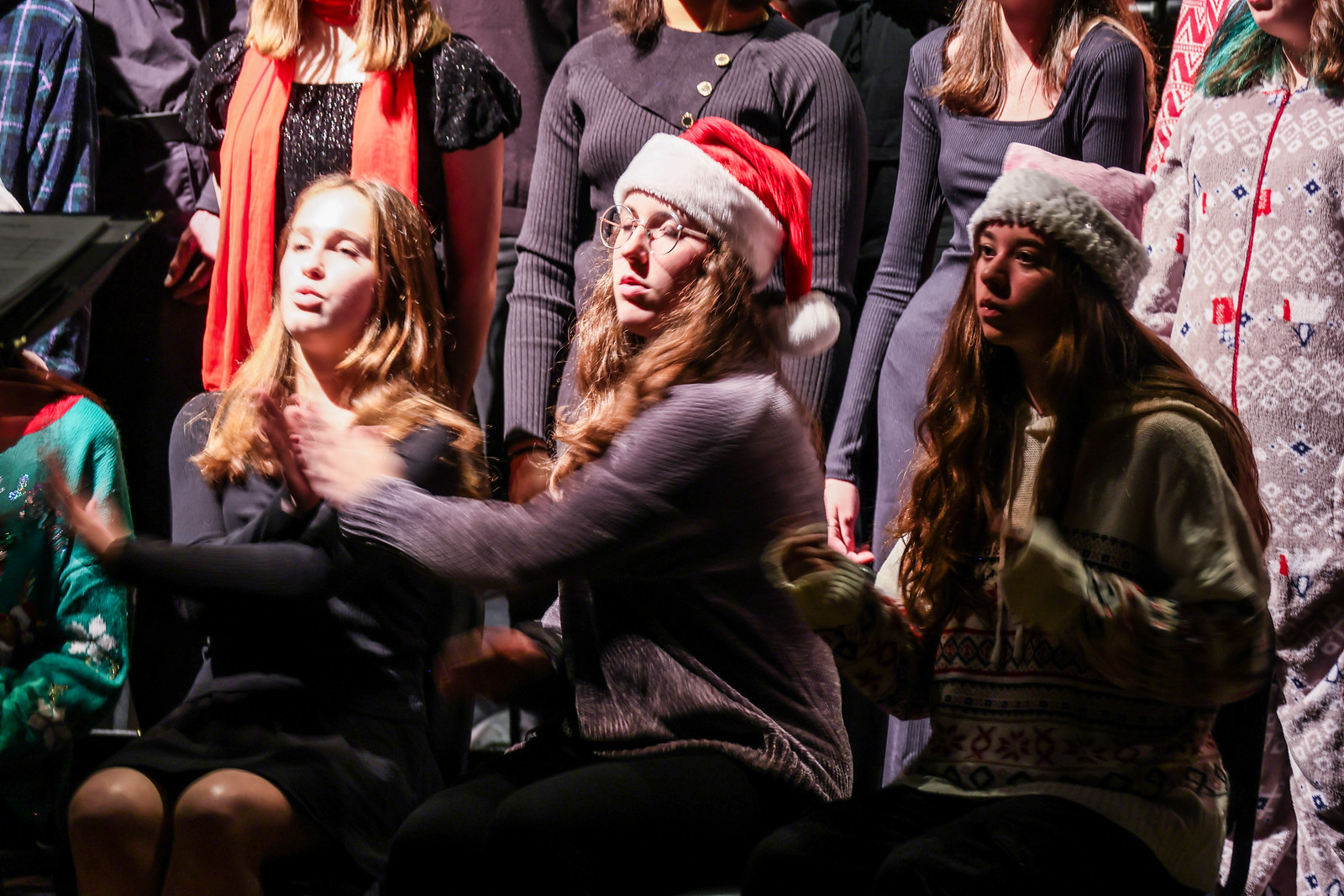 Another attempt at capturing motion but keeping faces in focus. I’ll give it a C.

In general, experience and practice helps. I just need to keep taking more photos and thinking about what I’ve done. I think writing like this will help. The more I do in more diverse circumstances, the better I’ll know what to do. That will let me focus on taking interesting pictures and know what decisions will aid taking more interesting photos. It also makes me want to buy more equipment. I need a go fund me.

1 That definitely sounds like an illness of some sort.

2 That was especially true with the Cabaret photos and I probably failed at not over-representing. Certain people just make for better photos. Deer horns help.