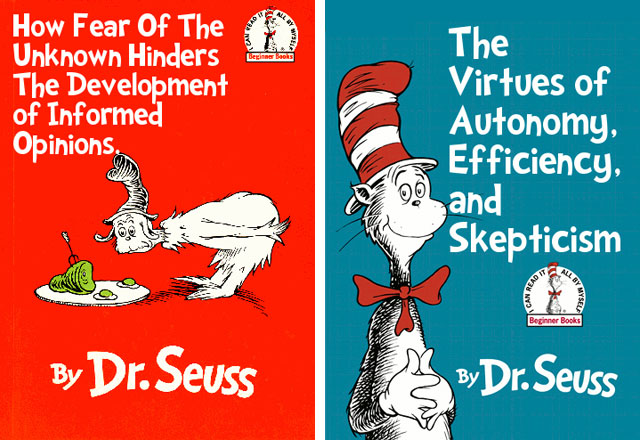 
Makes for an interesting project for any kind of book and maybe an introduction to the concept of a theme/thesis statement.
via It’s Okay to be Smart

I’ve posted on the Google Translation idea before but this video adds a decent introductory element (although I’m not sure kids today are familiar with the Fresh Prince).

Can you create a sentence that isn’t corrupted by the Google Translation torture test? Who can create the longest sentence that remains pure? The most complex? When do things break down? Why?

It might be fun to take the quotes of different authors and see what stays true and what ends up muddled. Then you breakdown why. Endless fun.

Added to the Podcasts

New to me, via Boing Boing

Words we ought to have in English

8. Tartle (Scots)
The nearly onomatopoeic word for that panicky hesitation just before you have to introduce someone whose name you can’t quite remember.

via The Week and a number of other people.

I’d like to see what words kids would come up with that we need. It’d be a fun way to discuss when we need one word vs many. I’m also betting they’d come up with needed words that already exist in English. Compare to your textbook’s plant cell image- via Fresh Protons

Compare to Garfield or your typical “no whining” poster. If the gentle reader noticed it looks kind of like a cruise missile, they were onto something. That’s exactly what it is, a cruise missile. Typically launched from a Betty bomber, though submarine and cave launched versions were also planned. It only had enough fuel to fly for 20 miles or so, so it had to be launched pretty close to its target. And yes, it had a pilot. This was World War Two, electronically guided missiles were still a dream, if a cruise missile was going to hit any thing smaller than a city, it had to be piloted. Yes, this bad boy was the Yokosuka MXY-7 Ohka (Cherry Blossom) purpose-built suicide plane. It had a 2,000 lb high explosive warhead, and could fly at over 400 mph (650 kph) in level flight or over 650 mph (1,000 kph) in a dive. This was considerably faster than the fighters of the day, and made them almost unstoppable if they got into a final approach. And yes, this was built by Japan in the last years of World War Two. It’s a kamikaze plane.

This is one of those historical photos that begs for a good series of questions to tempt students down the path that the author went through above. It links up a lot of different aspects of the war and technology at that time as well.