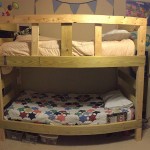 Like the music post a while back, I’m not going to attempt to tie this to education in any way. I’ll start this off with a caveat similar to my posts on programming . . . I’m just a guy trying to do stuff. Almost all of it is on the very edge of, perhaps a bit beyond, my competency levels. It is not unlikely that I will either say something that’s a bad idea or document something poorly. You have been warned. To set the stage, I have four kids. We have three bedrooms so the youngest two share a room. It’s not a huge room so bunk beds have been a topic of conversation for a while. I decided I’d talked enough over Winter Break and decided to make them. I have little woodworking experience. To the point that I’m not even sure if people call this woodworking. Carpentry maybe? I’m probably doing something like calling heating up pre-made cookie dough baking . . . Full disclosure, I have a table saw1 and a circular saw. I put in hardwood floors in our first house. I used floor glue instead of nails.2 I built a gate for that house as well. It weighed roughly 600 lbs and could withstand the charge of a bull elephant. It was a […] 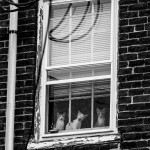 10:00 -10:50 am | Tom Woodward will be your guide on this photo safari as we look at the world through different lenses. This shift in both perspective and attention has the potential to change how you think about many things. After a brief exploration of a few different types of photography, we’ll take our new considerations into the world we walk through every day. On our return we’ll share what we’ve captured and look at opportunities to extend these conversations beyond today’s excursion. I’ve been wanting to take a group of faculty out to take pictures since hearing about Abilene Christian doing it. Seems like it’s a good idea in a few ways. We look at our regular location in a new way. People get a chance to see how many interesting possibilities are right in front of us every day. In general the process opens up the chance to talk about lots of things that apply outside of photography – like the ability to tighten up action/feedback loops to make progress, framing things conceptually and then doing, trying to imitate styles, etc. etc. I made a quick website that morning to hold photos we took so we could have discussions around the photos after the fact. Participants could submit via the Jetpack post by email option or through […]