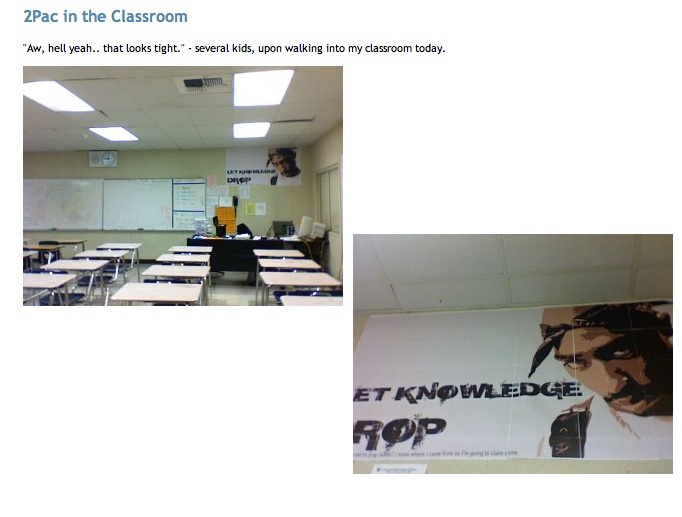 It really made my day to see ianvirgil actually print out and use the TuPac poster from this post (which was inspired by Dan’s post ). Funny how distance no longer matters- as they’re both in CA and I’m way to the right in VA.

I’m feeling a mixture of pride (I love when things I’ve done are actually useful and used) and envy.

Not being in the classroom sucks at times. There are certainly benefits but I really miss the kids and those moments when things really click in the classroom. It’s frustrating at times to do all this thinking about teaching and to have such a better understanding (as well as more tools) than I ever had before yet to be without a class of my own.

I’ll have the chance to work closely with Terry Dolson and her Core class next semester. We’ll see if that helps. 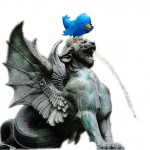 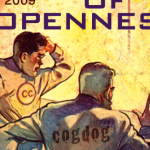 The Circle of Openess is Complete

Alan Levine, the magical CogDog, interviewed me a few weeks back asking about good things that happened to me because of the open way I share my work. He compiled a huge number of these stories for his presentation at the Opened Conference and they are well worth watching. Watch the archived version of Alan’s presentation below. OK, with all that as a set up here’s what I thought was wild about today. I’m in Virginia watching the conference which is in Vancouver3,000 odd miles away and nearly 3 days of driving on uStream because it’s a conference about openness after all. Up pops Alan’s presentation and I end up watching my own video interview which was a surprise. At almost the same moment I see over twitter that Jim Groom is there watching me as I watch me. I don’t know why this seemed so amazing to me but it did and still does. I see this as an amazing story of openness on so many levels and such a cool example of the beautiful way information can flow in instantaneous ways.

Bronze Age Orientation The “lessons” in the video are funny because they’re true (I think I’m quoting Homer Simpson)- don’t be a pompous ass (period, but especially not when advocating for a major change) positive version – Be humble. You don’t know everything and your way is not the only way. don’t make change a threat or tie it to a threat (the tribes with the bronze axes will kill you, the kids won’t learn etc.) positive version – Tie the change to positive outcomes for those involved. Focus on how it will improve their life. Why is it worthwhile for them? don’t put down the old ways (and then they’ll throw away your stone axes because they’re rubbish) positive version – Honor the past*. Even if you hate the old way, insulting it will tend to increase resistance to change. In education, the focus should be on adding tools and exploring options rather than in taking them away. The bronze shoes and window are also pretty similar to the “must use twitter based podcasts wikis” in class mentality too often seen in EduBlogosphere Land. Tools are tools and each has its place. This video shows the hypothetical meeting held to discuss changing from stone age technology to bronze age technology. You’ve got the reluctance you normally see (funny but […]