http://policeforum.org/library/technology/SocialMediaandTacticalConsiderationsforLawEnforcement.pdf Social media strategy guide for law enforcement- Do not allow an over-sensitivity to risk assessment to derail the process of developing social media . There will always be individuals in any organization who focus on the potential pitfalls of a new technology or process. Police leaders should focus on the potential rewards of using social media and then work to mitigate risks. http://t.co/0cLLzO3AN4 http://t.co/0cLLzO3AN4 #hcpsitrt — Tom Woodward (@twoodwar) October 25, 2013 tags: IFTTT Twitter law police socialmedia guide weekly itrt The true story about the woman who sued McDonald’s over hot coffee – Boing Boing “The story of a woman who spilled coffee on her lap and ended up being awarded $2.9 million in a lawsuit against McDonald’s is often cited as THE example of frivolous lawsuits and out-of-control juries. The real story, though, is different from the version you’ve probably heard. For one thing, the woman suffered burns to 16% of her body, some of which were 3rd degree. For another, at the time, McDonald’s served their coffee at a temperature 30 degrees hotter than the stuff that comes out of home coffeemakers. Also the $2.9 million was only the jury-recommended award, based on just two days worth of McDonald’s coffee sales. This New York Times video is an interesting look at the nuance that gets lost […] 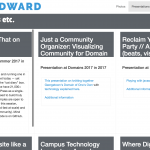 Below is the assignment I gave. I’m going to give it a shot starting with my own portfolio and then looking for aspirational goals in a subsequent post. Take a look around at portfolios other people are using. You’ll want to check out people in the field like Dr. Tressie McMillan Cottom but you’ll also want to look outside sociology for inspiration. Cast a wide net. Find sites that are doing things you like. Take targeted screenshots and explain what you like. Link back to the sites. Keep thinking about the data being presented, the user interactions that get you to the data, and the visual elements that appeal to you. Spend an hour or so looking around and getting ideas. If a particular search isn’t fruitful, try something else or jump ahead 5 or 10 pages in the search results. Don’t get bogged down. Once you’ve got a good chunk of ideas, use them to create a post outlining what you’d like your portfolio to be. Some people call this wireframing. If you like to sketch, sketch out things on paper or whiteboards and photograph (I do this often) them. You can also use a variety of digital tools to do something similar. Your portfolio is an interactive argument that provides a skeptic audience with a limited attention span […]

I’ve been meaning to do this for a long time but somehow never did. I want to see what happens if we build a custom Google Search Engine for VA educational content. I know we duplicate things a million times over. I’m hoping this might help. It’s low effort enough to make. Essentially, I’d like all you good VA educators who have common wants and needs to submit your county sites, your particular social bookmarking pages, wherever you have your vetted content living. You can embed the custom search in your own site with the code below and you can add your own sites to the mix using the form below. Loading…