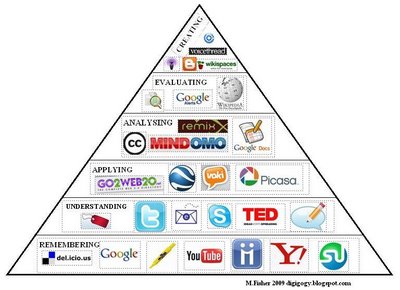 I was sent this image earlier today and it is very similar to something I worked on1 with Milobo a while back. This image was made to be “a visual representaion [sic] of a Digital version of the new Bloom’s hierarchy.” I want to explain what I see as a fundamental flaw in how this image is presented and why it matters. 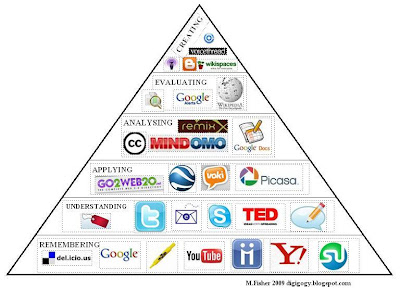 In this image the application is static and is represented on only one level. This reinforces the idea that the Blooms level is inherent in the technology rather than a result of its application2.

Let’s take Google Earth for example. It’s on the application level in the image. I’d argue that I can use it just as easily as a tool to create3, or to provide data to analyze4 or evaluate. On a lower level, I could use Google Earth to help me remember specific locations and facts about them or to understand how geography plays a role in military decisions at key battles.

Google Earth does does not lend itself to that kind of limitation that this image forces. I could say the same thing with something a little less obvious like Twitter. I could use it to create Haikus with added character limitations. I saw it used to create a book with multiple authors. I’m not saying these are key uses or even good ones. My only point is that tools are just tools. It’s the one who wields them that decides how they’ll be used. I often use Twitter to jot notes to myself, so i guess that’d fall under remembering. I could go on and on with Twitter and most, if not all, of the other applications.

I also realize that Mr. Fisher is probably not intending to limit these applications to these levels. He’s most likely suggesting places he feels they’ll best fit5. The reason that’s a problem is that this graphic is more likely to limit thoughts on a tool rather than expand them. The focus needs to be on the application and thoughts around the learning goals and process with the subsequent thought of what technology might assist in those goals.

So what I’m saying is we need to think about how these tools might apply to Bloom’s but do it in a different way. Tools will, by necessity, fall in many levels and we need to be able to show why and how that might happen. No doubt that’s a much harder concept and one that won’t display in a graphic easily but I think we (and I certainly include myself in this) may be oversimplifying to the point of obscuring. There’s also the risk of creating a false sense of security. The idea that I’m teaching well and at a high Bloom’s level because I use Voice thread is a dangerous (although popular one -look at me I’m blogging!) one. There are lots of educationally unsound and low level ways you can use Voicethread or anything else for that matter.

I am not, by the way, trying to be rude or abusive towards Mr. Fisher. I think he’s honestly out there fighting a good fight and trying to do good things. I applaud him for that. This just happened to coincide with a larger conversation we’re having in our county that I’m having trouble clarifying. This provided a chance to do that, at least in my mind. Hopefully I did not offend and, if so, I certainly apologize.

1 I’m not holding this up as a good example either. The one positive over the image is that you have applications in multiple levels. What it needs to make sense is examples of the use at various levels and a clearer indication that tools fall in multiple levels. We’ll probably get around to that at some point.

2 I’m not saying Mr. Fisher thinks that, I’m just saying the image lends itself to that concept. I also think the Bloom’s database we made would have this error as well because you can’t easily see that the application falls in multiple categories.

3 Students creating historically based maps (real or fictional) or maps based on literature like Google Lit Trips would be two examples.

4 There’s all kinds of seismographic, weather and other data you could analyze for which would then allow you to evaluate the best places to build, move etc.

5 I disagree on a number of them (I’m not sure where I’d but Creative Commons- Creating maybe?) but that doesn’t really matter.