I had the opportunity to work with Ryan Smith again recently. He’s been putting in serious work on on his website (Richmond Cemeteries) and is now turning a portion of that work into a book (Death and Rebirth in a Southern City: Richmond’s Historic Cemeteries). Ryan came by to talk a bit about pictures for the book which led to a field trip (Hebrew Cemetery and Shockoe Street Cemetery) and I think some useful reflections on how the balance between technology, technical proficiency, and art works together to make something interesting. It’s a bit of rambling tour of a series of issues that are specific to this task (getting high quality images of grave markers for a book) but are also illustrative of larger things. Basic Considerations Light Light matters quite a bit. When we looked through Ryan’s initial photos many of them were taken in very bright light. That’s good in some scenarios but leads to really hard shadows. In any photo, thinking hard about where the light is and how it falls will be key in creating the image you want. Usually you want the light behind you. Usually you want it to be soft. I showed up a little before sunrise but I didn’t have a shot list and I’d never visited the site before. That led […] 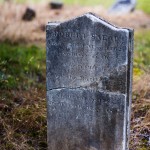 I went driving looking for things of interest to photograph. I saw a small cemetery on the side of the road and stopped to take a look. I thought it might be a local family cemetery and it was . . . only the family was from much farther back than I thought. View Snead Cemetery at Edgewood in a larger map That he was born within 9 miles of Hanover court House on the 23 day of May 1762, that, he has seen a record of his age in the family Bible, and that he believes it is now in possession of Benjamin Thomas, of the said county; that when he went into service, he lived at the place of his nativity, that since the Revolutionary war, he has lived in the same county near Ground Squirrel Meeting house1 and still lives in the same place; that he served many tours; the first he substituted himself for his brother John Snead, in the company of Joseph Cross, that he marched as a private in that company in the fall or winter of 1778, as he thinks to Williamsburg; that he served at that place and at a place called Rich Neck [in Richmond County] until discharged after two months; that during this tour Gen’l [Thomas] Nelson2 commanded; that there […] 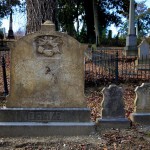 I found a decent paper on gravestone imagery and a few other sites as I explored around. There are quite few people interested in gravestones. I figured I’d create a little mini-guide using the images I’ve taken at Hollywood Cemetery. It’ll likely make sense to do something more formal later on but doing elements of possible future student work helps me work through things. Clasped Hands The “handshake” on the grave can mean different things. In this case you’ll notice that the sleeve on the right is feminine and the one on the right is masculine. This tends to mean a husband and wife joined in life and death. Three Chain Links This one is often a Masonic symbol or the Independent Order of Odd Fellows (new to me). I had thought it was something to do with the Father/Son/Holy Ghost. Flowers It is interesting to think of flowers of symbols of short life. It bring a new perspective on their use at funerals. IHS While it looked like a dollar sign to me initially . . . IHS are the first three letters of the Greek word for Jesus and may also represent hoc signo vinces (in this sign you will conquer) or Iesus Hominum Salvator (Jesus, savior of men). The Dove A symbol of peace and rebirth. Southern […]