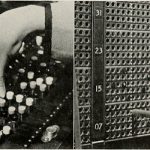 flickr photo shared by Internet Archive Book Images with no copyright restriction (Flickr Commons) Often, people really like the workflows enabled by Google Forms but they’d like it to go one step farther . . . like adding up two submitted items, or running a particular function/formula against the submitted data. You can certainly go in there and manually enter formulas or drag down to apply them to additional cells but that sucks and if you’re automatically displaying this data live somewhere it’s an impediment to a solid workflow. Most importantly, it sets a human to do something that a machine ought to be doing- that is the path to Skynet assuming control. We can and must resist! Subjugate the machines whenever possible! The script below is broken into three parts and shows two different ways to set the value for columns based on data entered in a form. Part 1 – This is pretty much default information that lets the script know which spreadsheet and which page it’s working with. The getLastRow() is really handy for applying this to data as it is entered. This example form writes data to columns A – K. In example one, we do the math internally and just spit the result into the cell. That’s handy for lots of stuff and can be […] 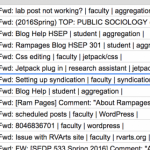 Random Stuff I Learned This Week

I’m messing around with some workflows to figure out how I’m spending some of my time . . . and, as a result, spending some of my time on how I spend my time. One of those efforts is trying to get some decent numbers around how my own efforts towards rampages support are going. I have my gut feelings but figured I’d see if I could work out a low energy way to document some of it in a more specific manner. I’m currently playing with a simple IFTTT recipe. It takes an email to a specific address with a specific hashtag (#vcusupport in this case) and puts it into a spreadsheet. I modify the subject line so that it’s #vcusupport HELP ME! | faculty | aggregation |. The regex1 below pulls out the elements and puts them in separate columns. Giving me something like the data below. Grabs content between two characters (in this case my “pipes”). =REGEXEXTRACT(B:B,”\|([^()]+?)[\|].*?(([^()]+?)[\|])”)) I started to do some work with Zapier as well. I actually prefer it in a number of ways (much more granular data and other neat things to pull from email) but the price was way too high for this type of use. I might try a more direct API route within Google if I end up feeling the need […]