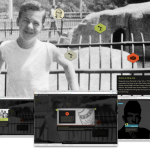 In working with students in the Digital History course, we’ve repeatedly bumped up against the idea that it’s harder to make a cohesive argument on the Internet (vs a traditional paper) or that constructing a web-based exhibition abdicates controls you have in physical space. There are frequent examples of archives referenced in the texts (Valley of the Shadow for instance) but for various reasons (age, limited time/space/knowledge) there aren’t many decent examples of constructing a multimedia argument or experiential/immersive examples. So here’s an attempt to show some sites that are far more than a-bunch-of-stuff-on-the-Internet and some elements that help them do that. Kennedy/Oswald It’s a bit heavy on the parallax for my taste but it’s a pretty direct parallel to a museum exhibit. It sets out to parallel the lives of Kennedy and Oswald reinforcing that parallel with visual metaphors (split screen transitions, similar images etc.) to reinforce that concept. There is a main text-based storyline, music to reinforce a certain mood,1 and the ability to see supporting elements by clicking on various items. The movement through the site is very guided. The links are kept within the site and remain contextualized rather than leading to other sites. The ancillary materials are a mixed bag of audio, images, video, and mixed media. Digital primary source materials are used throughout to […] 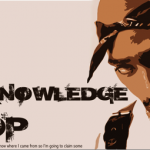 Step Up Yo Vocab

I’ve got to give complete credit to Dan for the idea and the example rap poster. After seeing his great poster of Talib Kweli I had to make some of my own. Both images will link to fairly large jpgs. Dan’s blog is what this one might be if it were better so be sure to pay a visit. While some will take issue with the grammar/spelling (I’m not sure which subject “yo” would fall under)- they’re great lines from the lyrics of both artists (although Jay Z doesn’t actually say that line I’m giving him credit because it’s in his song). I would have killed to have posters like these back when I was teaching or in the Boy’s & Girl’s Club I worked at. They’re the perfect fit for certain demographics. Granted they won’t fit all places or all teachers. Remember to “keep it real“- which would probably include not using phrases like “keep it real.”